Three decks with this exact hero lineup have been published in the last few days so I thought I would test them all back-to-back! I’ve always been a Tactics Theoden fan and upon the release of Eowyn I became more excited for solo Tactics possibilities and then Hirgon blew open a whole new world of solo tactics fun. This lineup is incredibly strong, especially early game when it can quest for as much or more than any 3 heroes in the game!

I will be testing each deck once against Into the Pit. The scenario is not hard but it can swarm enemies which should be fun. The high starting willpower is ideal for getting through that opening location that prevents enemies from engaging.

Created by Rings user McDog, this version of the “Hirgon deck” focuses on eagles allies with the late game goal of using Support of the Eagles to power Theoden up to incredible stats. The deck description is helpful as it outlines what you should be looking for and accomplishing at each stage of the game.

As I expected, the 11 starting willpower from the heroes alone blasted through the East-Gate and kept me moving through a unique location each turn. On turn 1 I quested with all three heroes and just hoped Sudden Pitfall didn’t knock out a hero. In subsequent turns I tried to quest with an ally just to protect myself against that card.

I quested aggressively and probably moved more quickly than was safe hitting stage 2 on turn 3, revealing  a Patrol Leader and fetching another, then adding two Goblin Swordsmen to the staging area through shadow effects! I had enough attack to kill one leader, but the damage was blocked by the Leader’s forced effect leaving me to face 4 enemies on turn 4. I managed all the enemies the following turn but had to YOLO quest on turn 6 to avoid taking undefended attacks when I had 4 enemies engaged and not enough characters to kill them off.

Questing for 16 on the 6th turn I completed the last stage in one turn and won the quest.

This deck contains 25 allies which guaranteed that I always had an ally in hand. Focusing the deck on eagle allies helps with Tactics’ primary weakness which seems to be card draw. Eagles are also nice and cheap and it was easy to field two per turn, playing one in the planning phase and another after questing with Hirgon. The use of Eagles also means you won’t be building up a swarm of diverse allies like some Hirgon decks. This deck built up a couple large Eagles of the Misty Mountains which were great but almost proved to be my doom when I got swarmed. To be fair 9/25 allies weren’t eagles but I only drew 1 of them the entire game.

This hero lineup is fantastic and will always prove strong against quests that allow for “blitzing.” The eagles provide a really fast start to combat as well, but they do leave awful quickly leaving the deck with a few large allies instead of a diverse swarm. Including copies of the Derndingle Warrior, Honor Guard and Legolas are excellent choices that round out the deck a little and help out in multi-player games. Unusual choices include Favor of the Valar and Grappling Hook. Favor of the Valar is one of the only options for threat reduction for Tactics but I think Secret Vigil might be a good choice as well since its a good bit cheaper. Threat reduction will probably not be a problem in most solo games with this deck since it starts at an incredible 27 (with 32 stats worth of heroes on the board!) and aims to race through quest stages fairly quickly.

Including Support of the Eagles gives the deck options against bosses and larger enemies but without any readying, that forces you to not quest with a hero, which while possible, can slow down the deck. The same applies to Foe-Hammer: with plenty of strong allies around, I tend to rarely actually attack with a hero. It can be worth it, but it has to be planned for. Sterner than Steel might be a nice substitute for Foe-Hammer if you decided you wanted to exclusively quest with the heroes.

I think this is a solid deck that ramps up quickly but doesn’t build up as strong of a board presence in the late game as other versions of the deck.

This version was built and published by Rings user SecondhandTook (who has an excellent blog!). This version includes eagles as well, but only 9 of 27 allies have the eagle trait. 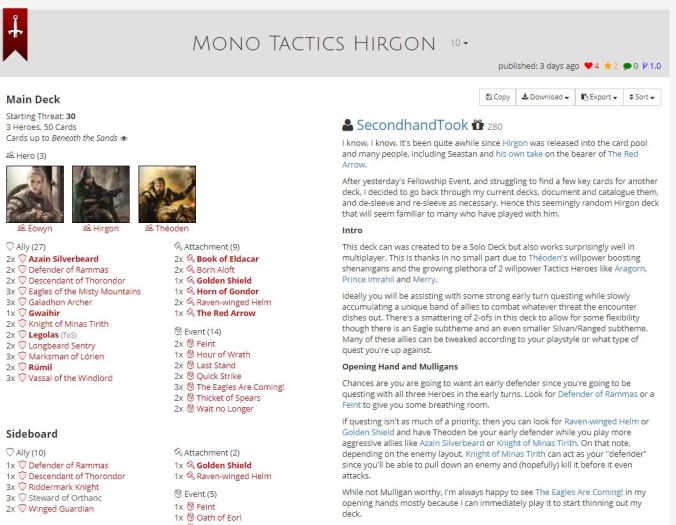 This deck blew through Into the Pit as well. I did stall on stage one for an extra turn to get my board set up a little more before jumping to stage two, but I was more cautious than necessary as I only had one enemy at stage 2 which I was able to destroy right away. Knight of Minis Tirith is one of my favorites in a Hirgon deck as you can almost always trigger his ability. He came in handy here to ride down one of those annoying 3 threat Goblin Scouts who can’t be engaged while your threat is between 25 and 37. I think the Knight is a auto-include in a Hirgon deck and he proved useful here!

With only 9 eagles in the deck, The Eagles are Coming didn’t get me any cards and might prove superfluous. I did get Legolas (a 2x card in this deck) out right away which helped keep cards in my hand.

The event selection is very nice and diverse equipping the deck for a variety of situations. I would probably not include Thicket of Spears in this type of deck, but with  the defensive ally count a little low, it might prove useful. Last Stand is another card I don’t use much but may prove effective here with plenty of allies with 2+ attack.

The encounter deck was fairly gentle with me and I quested through the last stage on turn 6 again.

This deck was a little closer to the version I play and I was comfortable with it. It plays quickly and efficiently and has lots of options with its nice selection of events.

The high quantity of ranged allies is solid for playing with others and helps Rumil really knock out an enemy when he drops.

Cards that I didn’t find useful include Born Aloft (which can be fun with Descendant of Thorindor), Quick Strike, The Eagles are Coming and Thicket of Spears. The deck is great at questing and killing things but might be be light on defensive allies. While it does include Golden Shield which can turn Theoden into a strong defender, I would be tempted to up the Defender of Rammas count to 3 and include Raiment of War, maybe Defender of Cair Andros and/or Gondorian Spearman and a 3x Sterner than Steel. One might consider switching out the Raven-Winged Helm for a couple copies of Honor Guard to have more flexible damage prevention.

This final version is a more thematic take on the deck published by GMAN3000. This is actually his first published deck! Welcome to the community! This is the “tightest” take on the deck with only 20 different card titles included compared to 21 and 27. This deck is limited to mostly Gondor allies for defense and Rohan allies for attack and it works out very well! The description is thorough and useful if a little long (my descriptions always run long…).

I threw this up against Into the Pit just like the others and it completed it in 5 turns! I did draw a Watchful eyes early in the game which I attached to Theoden so he didn’t quest or do anything for most of the rest of the game.

The combination of 3x of Defender of Rammas, Gondorian Spearman and White Tower Watchman in conjunction with the excellent Gondor defense cards gave the deck the most solid defensive position of these three decks.

I drew Legolas early again which helped immensely (I would up the quantity to 3x to help with consistency). I actually put a Raiment of War on a Gondorian Spearman and he lasted  through the end of the game!

Unusual features in this deck include OHaUH Gandalf who can boost your willpower numbers up even further. To counteract the threat hike there are 3x Favor of the Valar and 3x Secret Vigil. If you were to play Gandalf, it could get you into Valour mode so the Red Arrow could fetch another ally. Both Spear of the Mark and Spear of the Citadel are included as thematic weapons and are good choices considering they can both be equipped to allies while the heroes quest. White Tower Watchman is also an unusual ally to include since he won’t be benefit from Hirgon’s cost reduction. He’s always nice to have around, especially when there are shadows that will knock out that Defender of Rammas with the “Deal one damage to the defending character” effect leaving it totally undefended if you haven’t attached Raiment. This quest also has the infamous “Discard the defending character” shadow effect which the Watchman could mitigate. It’s good to see the new Elfhelm included and I actually used both copies to good effect with his special “sneak attack” attack ability.

This thematic version exceeded my expectations and was fun to play. With the damage prevention of the events, the higher defensive ally count, the inclusion of threat reduction and Sterner than Steel, the deck is hardy and highly suitable for solo play. The lack of ranged characters compared to the versions above pushes this deck further into solo territory.

Gandalf is an interesting choice but can give the decks couple nitro turns if it needs it.

This style of deck will always be strong and fun to play. With the exact same heroes it’s amazing how different the ally lineup can be. Defender of Rammas and Legolas are the only allies included in all three of these decks!

I would recommend Red Arrow Brings Rohan to Gondor’s Aid as the most thematic and possibly best solo deck of these three.

I rate Mono Tactics Hirgon as the strongest multiplayer deck with its abundance of ranged and sentinel allies.

Tactical Questingramped up fast with cheap allies and plenty of card draw and it proved the most aggressive tactically, but also most dangerous (and exciting) to play since the eagles rarely build up a large army. It’s hard to rely on power on wings! These are ill-informed opinions at best since I only played each deck once against a quest that was really too easy for this style of deck, but I hope at least half my opinions are helpful!

There are currently nine decks with this hero lineup on Ringsdb, each with its own spin on the idea. Thanks to SecondhandTook, McDog and GMAN3000 for posting these decks! Go ride down some orcs with these fun decks!