This version of a Silvan deck was created and uploaded by Rings user Rimogard. I was recently discussing the strengths and weaknesses of the Silvan deck with a friend, so this deck caught my eye. One of the difficulties in putting together a Silvan deck is deciding which sphere to leave out of the hero lineup. Silvan really needs the tactics allies and weapons to be strong in the combat phase, but it also needs Spirit for all the cheap allies and Galadriel, and it needs Celeborn for all the stat boosts, and it needs Lore for all the events and strong Lore allies! The Silvan deck has a hard time cutting any of the four spheres, but usually I see Tactics cut out of most “classic” Silvan decks.

This deck cuts the Lore hero and adds Tactics Legolas for more combat prowess. The deck still has access to Lore through Galadriel with Nenya.

I played this quest 3 times, losing to an early enemy rush the first game, but having a fun and successful second game. In my second play, I saw a high ratio of locations come off the encounter deck and was able to keep my willpower numbers steadily growing. The game was fairly short at 7 turns and I only had to face 3 enemies.

A couple combos really game together when I engaged the Orc War Party. I quested hard, then pulled a Silvan Refugee back to hand with Tree People drawing Rumil which dropped 2 damage on the War Party. With a Sneak Attack/Gandalf in hand, I was able to finish off the War Party without letting it attack at all!

I beat Intruders in Chetwood once!

Sudden Assault is one of my all-time-least-favorite treacheries in the game, but this deck handled it fairly well. With at least one cheap ally questing without exhausting each turn through Galadriel’s ability, I always had a chump ready to throw in front of a questing-phase attack from the staging area.

Can’t even be cancelled…

My main concern with this deck was the cost curve of the spheres, and that fear turned out to be well-founded. I got tied up with too many Tactics and not enough Spirit/Lore resources in each of these games. Resource matching was so limiting I decided not to play too many games with the deck.

Too much pressure on Galadriel!

While O Lorien! should help with resource smoothing, there is just too many Spirit and Lore cards in the deck. Since O Lorien! only reduces the cost of an ally to a minimum of 1, it doesn’t help with Henemarth Riversong, the Weaver or the Refugee. Looking back over the decklist and the sphere stats, I can see that there are 26 resources worth of Spirit and Lore cards (and only 5 cards can be reduced by O Lorien!) while there are only  3 Tactics allies and a total of 13 resources worth of Tactics cards. There’s too much pressure on Galadriel’s resources and not enough Tactics cards to fully use Legolas’ resources.

I think there is a good deck to be made with this lineup of heroes! As it stands, I think this deck needs to work out some resources smoothing or restructure the deck a bit so you can play cards faster without getting limited by resource matching.

One could go several ways in smoothing things out:

I took the liberty of cloning the deck and tweaking the list a bit to bring the cost curve into a more “comfortable” place. 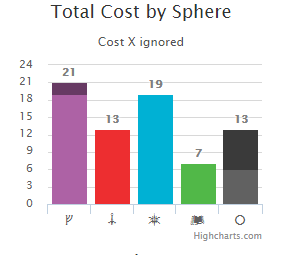 I gave the deck a play with the altered cost curve, and found I didn’t have dead cards in my hand as often. You can see the deck‘s original cost curve above compared with an altered deck in which I removed some Spirit cards and added some neutral and Tactics cards.

The deck is playable as is, and I actually beat Intruders in Chetwood with it once, but with a little testing and tweaking, it will function better with a smoother distribution of cards within the 4 spheres.

Thanks to Rimogard for posting this Silvan deck!