Here we have a look at a Gandalf/Thurindir/Folco deck! This sidequest deck was created and sent to me by Rings user OKTarg. 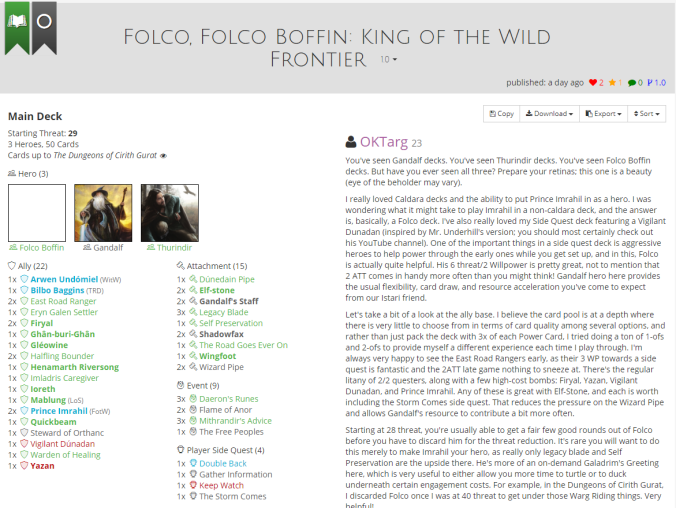 I always enjoy a Gandalf deck, and I’ve been playing a lot of Folco decks lately. I haven’t played many decks focusing on sidequests yet, so I’m interested to see how this works. With a fairly standard ratio of allies, attachments and events, the diversity in allies is something that makes this deck stand out. With 22 allies included, only 4 cards have two copies and the rest are single copies. This should make play interesting, but may make the deck inconsistent.

OKTarg mentioned that this was a quest he had tested the deck against so I will start here.

I got a good first draw with 2 sidequests and The Road Goes Ever On in my hand, along with all 3 Legacy Blades by turn 2. By turn 6 I had completed all 4 sidequests in the deck, Thurindir was questing for 6 and attacking for 8 with Henemarth Riversong making sure he readied after questing with Wingfoot. Everything seemed to fall into place in just the right sequence. Elf Stone let me play Firyal and the Vigilant Dunedan fairly early which was a huge boost.

I moved to stage two on turn 8, and put plenty of progress on it before engaging the Mumak on turn 9. With my scrying, I was able to precisely quest, defend the Mumak with Gandalf and attack back with 30+ attack and win on the next turn. I chose not to discard Folco this game since my threat never got above 35. I did have Imrahil out, along with The Storm Comes, so it wouldn’t have effected my resource generation or resource matching.

The Savage South can be a cruel treachery, but with so many 1x cards, it doesn’t do much harm at all here! I drew the last card of my deck right before I won on turn 10. A decisive victory!

Test 2 – Journey Along the Anduin

The game is loving me tonight. I got set up in a beautiful cycle on stage 1 where I was just peacefully floating down the Aduin clearing sidequests one after another. With Banks of the Anduin going back to the top of the deck every other turn, I could set up my deck in relative peace.

Things didn’t come up in the perfect order this time, but it still worked OK. I didn’t draw The Road Goes Ever On until I had already completed all the sidequests

Once I hit stage 2, I only spent two turns on it, revealing only one enemy. I did reveal a double Necromancer’s Reach on the next turn, but I had seen the first one with Henemarth, so I was able to save everyone except Henemarth and Arwen. I hit stage 3 with an empty staging area and revealed two locations, winning the game on turn 9. I completed a total of 7 quest cards in 9 turns! Not bad. 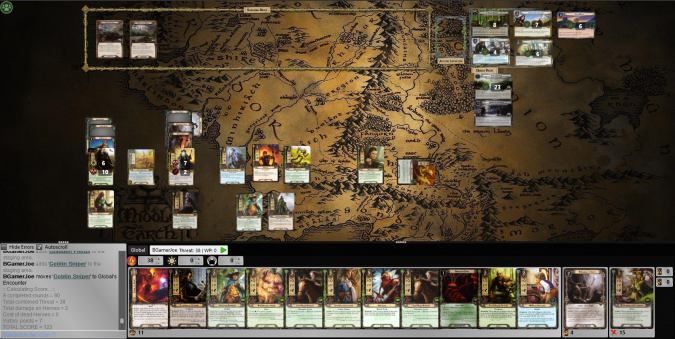 I played it again and it was more challenging but still a solid win. I stalled at stage 1 for 9 turns to get all 4 sidequests completed. I had to discard Folco early to avoid the troll for a few more turns. Gandalf’s Staff made up for the resource loss, but it did hurt since I didn’t have Imrahil out yet.

I used one of the 5-cost allies one top of my deck with Flame of Anor to kill the Hill Troll again. I used The Free Peoples to blast through stage 2 in one turn, questing for 30 and leaving all heroes ready for the last battle on the shore. I was lucky and blindly revealed Pursued by Shadow, which could have really hurt, but since I just played The Free Peoples, every character except Warden of Healing was committed to the quest!

Getting through stage 2 in one turn meant that I only had to face one enemy at the end of the quest and it was a one-sided-battle. Poor dead Wolf Rider.

Can sidequests and time counterS coexist? Things were going OK for the first few turns until I started taking time counters off at the end of turn 3. It took a minute for me to comprehend the magnitude of the pickle I had created for myself before I scooped. Not the best quest (or cycle) to test this deck against.

This one took two attempts to beat. I got  too many enemies engaged too soon in the first attempt.

The second attempt took some careful play, but I was able to clear all 4 sidequests in stage 1 again. The biggest challenge of Into the Pit is getting past the Gate at the very beginning without too many enemies and locations building up.

I got stuck at the gate until I got Ghan-buri-Ghan down. He got 7wp off the gate as the active location and I was able to get through.

I was glad to draw Double Back after my threat hit 40 while still in the first stage!

Henemarth and Firyal proved very valuable again here. Henemarth can check the deck before you use the Cave Torch to make sure no orcs are waiting right around the corner.

I was able to trigger the Eryn Galen Settler to clear a Fouled Well. At 3 threat and 5 progress points, that’s not a bad day’s work. Not sure why he would settler in a fouled well, but I’m glad he found it homey.

I didn’t see the Vigilant Dunedan until the last turn, and he would have been really nice earlier! All those goblin started to overwhelm me for a bit on stage 1. Gandalf had to use Flame of Anor again just to keep one from going undefended.

I attached Watchful Eyes to Folco midway through the game and never used him again. I should have just discarded him at that point… not sure why I didn’t.

I quested through the last stage in one go on turn 11 at 44 threat and with 5 cards left in my deck. That’s a little long for Into the Pit, but sidequest decks need a couple extra turns.

Each of these three heroes have a “strong personality” and often define the deck they’re included in (Boffin in a strange, absent sort of way), but here they actually compliment each other quite well! Gandalf provides early game power and stability as well as support through his Staff and the ability to play sidequests from any sphere. Thurindir provides late game powder with his eventual 6wp and 8 Attack as well as getting the engine moving with his starting sidequest. Folco’s role is less glorious, but useful. He’s basically a long-necked security blanket: invaluable in the deck’s infancy, but happy to help by being discarded when the deck has reached maturity.

The card draw in this deck is essential and it has just the right amount: a ton. Gandalf alone can “draw” 3-4 cards per turn by playing an ally/attachment during planning and then playing more events off the top during other phases. I tried to keep the staff available for discarding shadow cards, but I ended up drawing cards with it about 1/3 of the time. Mithrandir’s Advice is great, especially when he advises himself by playing it off the top of the deck and getting the full 3 for 1 deal. It does become less useful if you discard Folco. Daeron’s Runes is always good card draw, but here with all the single copies of cards in the deck, it’s still useful, but often forces you to make a hard choice, possibly discarding a card you know you won’t see again during the game. Gather Information and the Road Goes Ever On are nice targeted draw that are perfect here. I would almost be tempted to just include another sidequest rather than The Road Goes Ever On, but this way you can grab the one you want.

The sidequest selection of Double Back, Gather Information, The Storm Comes, and Keep Watch is solid. I might throw Rally the West into that mix just to see Thurindir power up that much faster. I’m glad to see Keep Watch included. It makes a huge difference, especially since the deck is a little light on defense.

The ally selection is wide and varied. The only ally I found less than useful here was The Imladris Caregiver, just because I hated parting with all my unique cards. Including this healer and Daeron’s Runes might be overlapping too much and plain old Warden of Healing might get more work done. I didn’t find myself wanting to spend the resources on Ioreth either.

The Vigilant Dunedan is great, good enough for a 2x in my opinion. Arwen is perfect for supporting him. Bilbo is a good include to help fetch the pipe which is essential for this deck. The East Road Ranger is pure gold here and I might even go 3x to make sure you get that 3wp early when you’re trying to clear sidequests . They’re expensive but really worth it in this deck.

The Harad allies help out immensely and are fun to get into play with Elf Stone. They can always be piped onto the top of the deck for an epic Flame of Anor if needed.

The attachment selection is solid with Legacy Blade really stealing the spotlight. Thurindir ended at 6wp and 8 attack with Wingfoot attached in every game I played. He becomes a killer which frees up Gandalf to defend.

The only attachment I never wanted/needed was Self Preservation. It would be useful in quests with more direct damage. It would certainly go on Gandalf.

The deck only includes 9 events, and 6 of those are card draw events, which are perfect for Gandalf to play off the top during resource phase etc. The Free Peoples probably isn’t needed but it’s so fun to play and I think it’s an ok choice. It can really turn an entire game around! I’m a fan of the Free Peoples. Even without much resource generation, it’s not that hard to play. If you carry over one resource from the previous turn, you can get the 5th resource from Gandalf’s Staff.

This deck worked great as a solo deck, but it should be fine in multiplayer games as well, as long as the other players are ok with spending time completing sidequests. The deck has a lot of unique cards which is a drawback for multiplayer, but it provides some good support for other players through healing and some Ranged and Sentinel.

I give it a thumbs-up! Sidequest decks aren’t going to be viable against some of the “race” style quests that force you to move fast, but this deck should work against a decent number of quests.

As a side note, I really like the current balance of sidequests included in the quests of the current Harad cycle. There’s enough to make it interesting, but not so many as the Angmar Awakened cycle where they can be insanely punishing (especially with 3+ players).

I like to see well rounded decks and this covers most of the bases: solid WP numbers, good defender with shadow prevention, good attacker with Legacy Blade, lots of healing, lots of card draw, and enough threat reduction. The weakest area is resource acceleration and it’s not really too tight.

I was initially worried about the deck being inconsistent with all the 1x and 2x cards, but with all the card draw and overlap between unique cards, it wasn’t much of a problem. It also keep the deck interesting.

Thanks to OKTarg for sending me his deck! Go over to Ringsdb and give it a like. Happy sidequesting!