This Doomed deck was created and uploaded to RingsDB by user WingfootRanger. The deck has a thematic focus on Aragorn’s adventures in Middle Earth before the events of the LOTR trilogy. 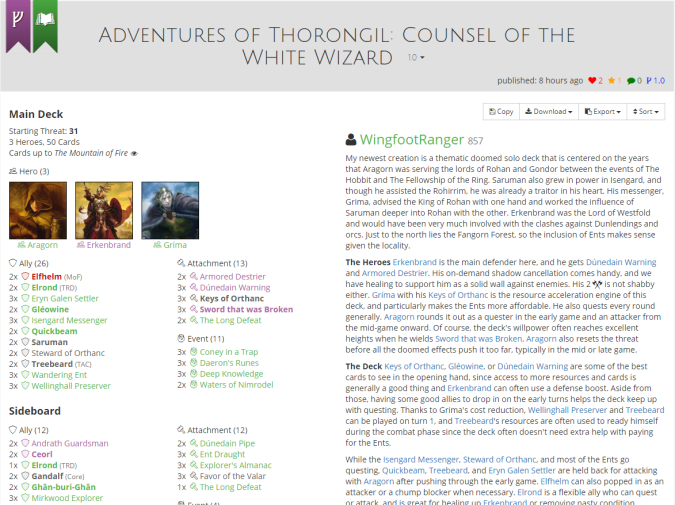 It’s hard to go wrong with Grima! He’s really an extremely strong hero for solo play! Erkenbrand is another of my favorites and Aragorn will provide the needed threat reset in addition to plenty of willpower and resource smoothing once he gets his Sword. I see a good amount of card draw which makes me a happy guy. There’s a good bit of healing included, but its all in “unconventional” form: no Warden of Healing! Instead we have some less-used cards like Waters of Nimrodel and The Long Defeat. I see a good smattering of Doomed cards, but nothing excessive. Legacy of Numenor is notably absent and I’m OK with that. Doomed 4 is hard to stomach, and I anticipate Grima+Keys giving the deck enough resources.

With well-rounded ent stats included here, I thought this might be a fun one to test against. It worked! I did get engaged with 3 enemies at once at one point and I was having trouble killing them off, but once I got over that hump, it was smooth sailing all the way until I crushed Bolg between Fanghorn and the White Wizard.

I got the Keys of Orthanc out early along with a couple Isengard Messengers which helped me dump plenty of progress on the willpower quest stage. The Keys of Orthanc/Grima combo is so great. It’s effectively Steward of Gondor resource generation except it’s more flexible since you’re reducing the cost of any card rather than producing resources for a specific hero. It does cost a threat, but that Doom powers up the Messengers as well. I was basically 2 resources and 2 willpower out of Grima/Keys every turn! The Keys certainly go on Aragorn since he gains the Leadership icon as soon as he gets the Sword that was Broken.

Once Sword was attached, I had plenty of willpower and would have blasted through a standard quest, but the Siege and Battle quest stages made this more challenging. This quest doesn’t have too many huge enemies, but there are some weird little effects to watch out for which almost killed me.

With 3 Warnings and 2 Destriers, Erkenbrand can cover the defender role like a boss. With no standard healing on the board, I did have to be judicious with his shadow cancelling effects, but it worked out fine.

I finished the very enjoyable game on turn 12 at a threat level of 39 with 9 cards left in my deck. I had 15 allies on the board and didn’t lose one the entire game.

Another solid win. This deck is sturdy!

The shadow effects in this quest are terrible and I was getting huge value out of Erkenbrand throughout the entire game! This isn’t an easy quest, but the deck performed extremely well and there wasn’t ever a moment that I felt in danger of losing (there is always the lurking fear of revealing Southron Champion, but it didn’t show up in this play).

The archery piled up and I was able to heal 14 damage at once with the Waters of Nimrodel.

Between the Sword that was Broken, Grima, Doomed events and the Steward of Orthanc, the Isengard Messengers proved to be excellent questers, usually contributing 4 willpower each.

Deep Knowledge, Gleowine and the Steward of Orthanc kept my hand flush with cards.

The ents handled the majority of the attacking while Erkenbrand was able to safely defend up to 3 attacks with ease.

The encounter deck wasn’t easy on me and I was regularly seeing three enemies out at once, but survived and quested through the last stage in 2 turns winning on turn 12.

12 turns is a little long for this quest, but with Aragorn’s threat reset, I played it safe and lingered on stage 1 longer than I normally would and cleaned everything out before advancing.

A solid and enjoyable game and a satisfactory 20+ attack against the Southron Captain on the last turn.

I’m not going to pontificate here. The cards choices are good. I’m getting cards into hand, I’m getting them on the table and they’re doing what they’re supposed to do. No card really feels out of place or useless. This is a well built deck!

I’m happy to see some newer and some less-used cards in this deck. Special commendation for using the new Elfhelm ally who can help in a combat pinch, Waters of Nimrodel and Long Defeat for non-standard healing, Saruman himself who provides epic moments, and Coney in a Trap for some early game defense.

The only small issue I ran into was needing to heal Erkenbrand but not ready to trigger Waters and not able to trigger Long Defeat. I like the big healing moments these cards provide, but some targeted healing like Dunedain Remedy or a healing ally would have been helpful for me a couple times.

It’s not needed, but the deck could almost run a copy of The Free Peoples. At the end of my games I had 9-10 traits out on the board at once.

I didn’t explore the rather large Sideboard, but I’m sure some of those cards would be helpful for different styles of quests.

This is certainly a solo deck. Almost any Grima deck is going to be a strictly solo deck and this is no exception.

This is a great deck! Go play it!

It covers all the game basics, and in some fresh ways. It has a solid theme but still functions in an effective and polished way. I would usually test a deck against another quest or two, but I don’t feel like I need to. It works.

I highly recommend you build up this deck and give it a go! I think you’ll enjoy yourself and win some quests.

Thanks to WingefootRanger for creating and sharing an excellent deck! Head over to RingsDB and give it some love! It needs some more likes!

One thought on “Deck #34 Adventures of Thorongil: Counsel of the White Wizard”