An Ent deck featuring Treebeard hero! This “alternative” Ent deck was created and shared on RingsDB by sappidus. While packing the standard lineup of Ent allies, this deck features an unconventional set of heroes who bring along a different set of support cards which prove very effective. 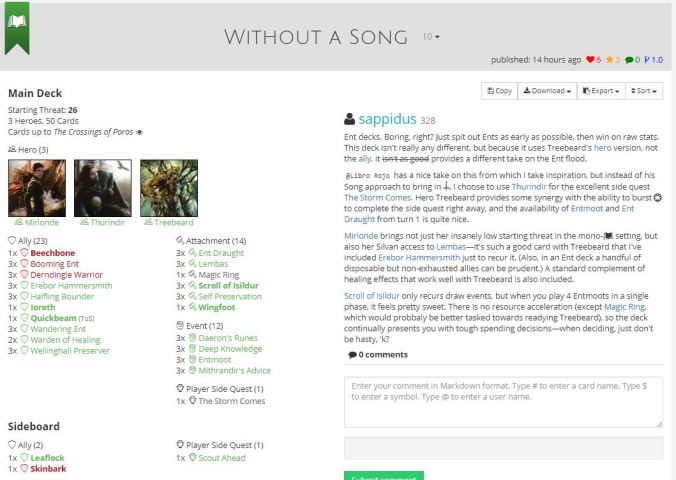 Treebeard is a tricky hero to support. The “standard approaches” seem to be either a splash of Spirit cards so you can get extra actions out of Treebeard with Unexpected Courage, or a balance of Lore and Tactics cards so you can run all the allies and use Boomed and Trumpeted to ready Treebeard. This deck goes an entirely different direction and it looks like it has no problem solving the difficulties Treebeard usually brings to a deck.

Coming it at 5 threat, Mirlonde not only solves the high threat issue that Treebeard struggles with, but she provides access to Lembas, one of Treebeard’s favorite snacks. Thurindir also brings a reasonable threat level to the deck, but with his accompanying side quest, he brings the crucial access to Tactics and provides a solid 3 willpower (provided you clear the sidequest) for questing.

It looks like it has plenty of card draw, but with no resource acceleration or cost reduction, it may struggle in the early game vs quests that hit hard and fast out of the gate. The low starting threat and high/flexible willpower may overcome that “sluggishness” that comes natural to an Ent deck.

With plenty of card draw and no extra resources, the decisions on what to play every round weren’t always easy. I tended to go for extra allies in most cases with Lembas being the exception. Treebeard’s flexibility is always stronger than I remember. Spirit Eowyn is great because she can boost her willpower after staging, but Treebeard can manipulate that number by so much more! Sometimes a game can be lost by coming 1 willpower short of clearing the active location or 1 attack short of killing that enemy. Treebeard can get it done!

I finished Tharbad on turn 9 with eight Ent allies out along with a Bounder and a Hammersmith.

This quest has really become my go-to testing quest! I must have played it 100 times by now…

This was a solid win! I even crushed the Southron Champion sidequest! The low starting threat really helped here. Starting at 26 gives you plenty of time before you have to start engaging those 32 threat-cost enemies. Between Treebeard’s flexibility at that low starting threat, I felt like I had solid control of of the game most of the time.

Again, I ended up playing mostly allies and leaving some of the attachments and events in my hand. I had opportunities to draw cards through Mithrandir’s Advice and recycling Ent-Moot with the Scroll of Isildur, but with solid cards in my hand, I was loath to actually spend resources to draw more cards when the cards in my hand were helpful. Self Preservation is another card that I haven’t felt like I needed to play yet. It can be great on Treebeard but so far I haven’t needed it.

I beat the quest on turn 10 with 8 ents and Ioreth and 2 Bounders in play. I never had a character destroyed through the whole game! 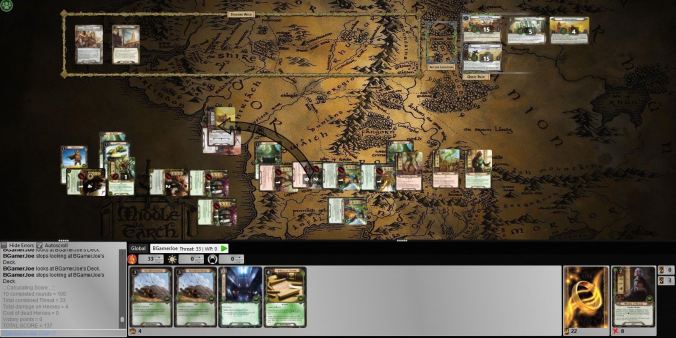 This quest pushes you to deal with enemies fast and it jacks your threat up fast if you don’t. It took me three attempts to beat it. I kept not getting a chance to clear The Storm Comes so I couldn’t get any Tactics Ents out which meant I couldn’t kill anything and then my threat spun out of control!

The third game was hard, but manageable most of the time and I won on round 10 with a threat level of 49 after drawing a Orc War Party on my last turn!

Even after my mulligan I only had one Lore Ent in hand at the beginning so all those card advantage effects really helped! It took me a bit to find those allies and build up a board state but things eventually came together.

This can be a difficult quest and this deck has a little trouble keeping up with the fast encounter deck. 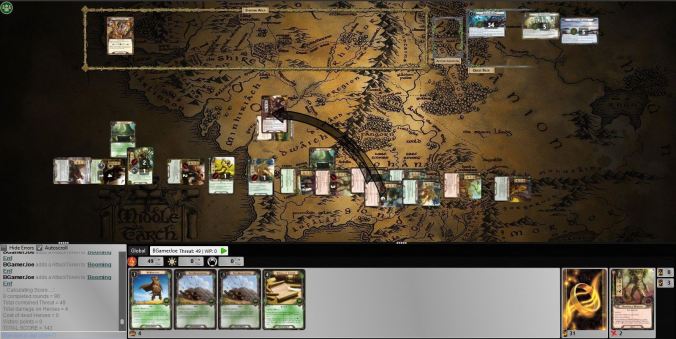 Test 4 – Journey Along the Anduin

This quest presents the challenge of the early Hill Troll and the potential of lots of direct damage.

The deck handled things nicely and won on turn 9. The Necromancers Reach treachery hit me a couple times which was a little rough, but it powered up my Booming Ents!

The challenge was completing The Storm Comes and getting enough allies into play before my threat hit 30 so I was ready to kill the Hill Troll on the same turn he engaged me. With Ents coming into play exhausted, it was tough to get a Derndingle Warrior into play and ready and 12 attack worth characters ready to take him down. I got the Derningle into play, but the Troll’s shadow ended up killing him anyway. I came up short on attack power with my allies, but Treebeard was able to contribute 6 and kill him off!

After a couple Necromancer’s Reach’s hit me, Mirlonde was in danger of dying if I drew another so I drew heavily looking for one of the Warden of Healing allies, but never found it and ended up just holding her back from the quest so she wouldn’t die. I guess I could have used a Lembas on her or even attached a Ent Draught to protect her.

I was able to get through the rest of the quest fairly quickly and finish on the turn I hit the nasty 35 threat threshold where the treacheries start to hit harder.

I don’t have a lot to say here! The deck works very well and it has a unique feel that’s very different from most of the Ent decks I’ve played.

There are a lot potential hero combinations for an Ent deck and this one takes its place in the upper half and it feels fresh and different. It lacks the consistent readying the Gandalf or Faramir might bring and it doesn’t have the massive resource power of Denethor/Steward/Elrond, but it has enough readying, smoothing and card draw to work very well and it always gives you choices. Treebeard brings his own strength by the way of flexibility which in this game is sometimes even better than a consistent strength. Sometimes the ability to adapt to what the game gives you is stronger than just counting on big numbers.

After playing several games with the deck here are a few comments I have on the cards included/excluded:

This deck should function fine in either context! It’s well suited to group games since it doesn’t claim many unique cards. The only “disadvantage” it has a multiplayer deck is its low threat. Since it lacks ranged attackers and only has 3 Sentinel characters, it may be unable to engage enough enemies to maximize its killing potential in a group game! If you were planning on taking this to a multiplayer game, I might throw in Gather Information as your first sidequest. You could fetch The Storm Comes and everyone else could grab a key card early as well.

This is a solid deck that has a unique feel! It showcases Treebeard’s power in the context of a true Ent deck and that isn’t easy to do! While the deck is strong, it doesn’t feel “dirty” like some of the super-ent or speedy dwarf decks out there. It’s strong, has some fun cards that don’t see a lot of play, and it has enough card draw that you will have fun choices every single turn. I give it two thumbs up! Or two twigs up…

Thanks to sappidus for sharing a great deck! Go like it on RingsDB and run it through some quests! Its not hard to pilot and you’ll enjoy yourself and most likely win!