This Spirit/Leadership Dwarf deck was submitted for testing by RingsDB user Rimogard. I’ve had the pleasure of playing a couple decks by Rimogard before including The O’Silvans and B is for Beorn.

This dwarf deck looks like it will be “swarmy with a dash of mining.” The description is clear and gives you some combos to look for. 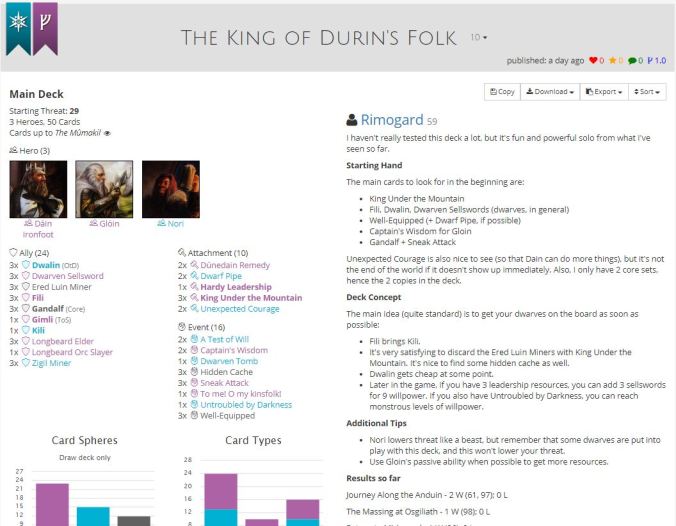 With 21 dwarf allies in the deck, this should get plenty of short stout bodies on the board. The absence of Lore will decrease the potential card draw, but Gandalf is there to help out and King Under the Mountain will help as well.

Some decks are built entirely around some of the cards that are included here. Gloin can be the center of an entire deck, but it looks like he is here to generate some early resource then just quest or attack. He is also one of the only Dwarves with the Noble trait which lets you play Captain’s Wisdom. There are also a few mining cards. The Zigil Miner is accompanied by the Dwarf Pipe, Hidden Cache, Ered Luin Miner, Well Equipped and King Under the Mountain. While the costs of cards is fairly diverse, you should be able to get some resources of the Miners and it will keep things interesting!

I had a strong opening hand which let me get both Fili and Kili into play turn 1 by using Captain’s Wisdom on Gloin. By the end of the planning phase of turn 2 I had 5 allies in play and was in a good position.

The direct damage treacheries hit me a couple times which slowed me down, but I kept moving and finished of Ungoliant’s Spawn on turn 8. Gandalf helped me draw through my deck. My main weakness for the quest was lack of healing until Dunedain Remedy showed up.

This quest went fairly smoothly with the direct damage and hero-shuffling treachery giving me the most trouble. Nori’s threat reduction was crucial and kept me from engaging the pesky flock of bats that accumulated in the staging area (forever immortalized by Brandon’s thememurder episode).

I went ahead and replayed the quest on Nightmare mode just for fun and won again. The consistent threat reduction really helped me avoid some of the worst Nameless enemies near the end. I drew Dark and Dreadful at least three times during the game so direct damage was my biggest issue again. The mining mechanic was hit or miss with some beneficial effect hitting about 40-50% of the time.

My first turn was very strong. I got three allies out and later played Well Equipped and got an Unexpected Courage on Dain for free.

This quest has plenty of archery in it to get that extra cash out of Gloin. It’s odd playing Gloin in a deck without heavy healing, but just those 2-3 extra resource near the start of a game make a big difference.

I kept track this time and I played a dwarf every single turn so my threat level stayed at 29 through the entire game! Nori is a champion. Dwarven Champion. Anyway…

Gandalf had to jump in and save the dwarves a few times when the Southron Archers showed up, but that was thematic and entertaining.

I beat the quest fairly quickly finishing on turn 8 with a mere 7 cards left in my deck.

Another win! This deck keeps winning.

The encounter deck didn’t throw many of the larger enemies at me, but with some careful managing, I was able to keep the Dunlandings at bay.

I didn’t use it much because I had a hard time getting my hand size down, but King Under the Mountain is a very strong card for the Dunland quests since you never “draw” the card, but just add it to your hand. It gets around all the card draw hate.

I beat the quest on turn 7 a decent board of Dwarves on the table. I got a big threat spike late in the game from a treachery or I would have stayed near that 29-30 mark the entire game.

This deck performed well. It has several different themes and isn’t very focused which I thought would bring the power level down, but the “little of everything” approach actually works pretty well here!

This is an interesting hero combination. Nori is the Spirit Dwarf of choice and is an excellent hero here. Dain is necessary to make a solo dwarf deck work at all. Gloin is an interesting choice. He’s usually matched with Lore of cheap healing so he can crank out the cash. In this case, there’s no efficient way to heal him (Dunedain Remedy will eat all the resources you create), but he still contributes. For one thing, he’s a 9 threat Leadership hero which is decent. He also brings the Noble trait which gives you access to a few more resources with Captain’s Wisdom. While he can’t keep producing money through the whole game, the few extra resources he can give you in the early game are valuable and make a difference. While this isn’t the most efficient use of Gloin I’ve ever seen, he actually contributes more than you might think at first glance. The one cost to bringing Gloin as a hero is that you can’t bring his strong ally version.

The Mining theme is less focused than most “mining decks,” but it does provide some resources without resorting to the ever-present Steward of Gondor. It would be stronger if there was a way to make the resource cost of the cards more uniform. Right now the cost of cards is fairly evenly spread between 0, 1, 2 and 3 with 3 being the most consistent at 13/50.

Since the Ered Luin miners cost 3, guessing 1 is technically the way to have the highest odds of getting something good. You then have 18 potential cards (12 two-cost cards, 3 Ered Luin and 3 Hidden Cache) that will pay off when mining. That’s .36 chance for each card and since the miner hits two cards you have a decent but not sure chance of getting something with a Zigil Miner. If you weighted the 2 or 3 costs cards a little heavier, it would certainly make it more efficient, but there honestly isn’t that many dwarf allies to choose from in these spheres. The only other potential allies are the Blue Mountain Trader, Bofur (would be a good choice), Gloin ally, Erebor Guard, and Dain’s doofus cousin, Mr. Brok Ironfist. So while I think the deck would do well to have a most consistent cost curve so the mining would be more productive, I don’t have an easy answer for making that change. Another method for increasing mining accuracy would be deck scrying which would mean Imladris Stargazer (which is too slow IMO), or some one off scrying with ally Galadriel which might be decent. She could grab you an attachment and point the Ziggies in the right direction and quest for 3 before she leaves. Not a bad investment, especially since it’s using resources from the deck’s dominant sphere. 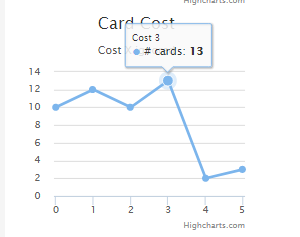 The ally selection seems to be working although it struggles to kill things if Dain is exhausted. Gandalf, Gimli, the Sellswords and the lonely Orc Slayer are the only allies with more than 1 attack without Dain’s buff so that Unexpected Courage on Dain is pretty important. I found it very easy to get Dwalin into play for 1 resource which is very helpful. He can defend once or twice for you which saves you the expense of exhausting Dain which makes enemies easier to kill. I found Gandalf’s 4 direct damage very helpful in a couple of games. Saving enough allies back to kill off the bigger enemies can seriously slow down your questing.

The attachments provide a little of everything as well. The mining is improved through Dwarven Pipe, we get some improved durability with Hardy Leadership and Dunedain Remedy and some card draw and readying Unexpected Courage and King Under the Mountain. My only comment here is that you might want to up the count on Dwarven pipe to 3 if you plan on playing a longer game. I was getting close to the bottom of the deck by turn 7-8 in most cases and if you continue mining, you’ll run out of cards by turn 10 at the latest.

The attachment selection covers a little of everything as well! A Test of Will, Hidden Cache and Sneak Attack are obvious and strong choices. Captain’s Wisdom and Untroubled by Darkness are very efficient cards for the deck and might warrant additional copies. I wouldn’t have considered Well-Equipped or To Me! O My Kinsfolk for a deck like this, but I can start to see the logic. With only 10 attachments in the deck, Well-Equipped won’t hit often, but it ties into the mining theme and getting a free attachment is always good! I got Unexpected Courage twice out of it! To Me! O My Kinsfolk is a weird card, but it provides a little flexibility during either the quest or combat phase and it put that card on the bottom of your deck which gives you one more card to mine! I didn’t get a chance to use it in my plays, but I think this deck is a decent place for a card that doesn’t get much play.

I was curious to see if I could adjust the deck to be more reliable for the Zigil Miner and after a couple tries, this is what I could come up with. I don’t think it’s better, but it has a higher number of 2 cost cards which bring the chance of any one mined card giving you something good up to 23/50. I played a game with it and it worked, but by the end I had way too many resources so maybe it wasn’t needed in the first place…

While the card cost is more uniform, there are actually more Spirit cards than Leadership in this alternate version causing a whole new problem. Best left alone I think.

There’s no reason this couldn’t be player in either context. Dain will help power up any other dwarves on the board in a multiplayer game, but the deck suffers from the dwarves’ lack of Ranged and Sentinel characters.

I commend the deck for it’s creative and thematic choices and for avoiding the Steward of Gondor/Legacy of Durin combination that pushes dwarf decks into the crazy camp.

This is a thematic dwarf deck that avoids some of the power combos but can still beat a wide variety of quests including a nightmare quest! What’s not to like! Thanks to Rimogard for sending the deck my way! You can check it out on RingsDB right here.