Today we look at another deck by Marcelf who created the Sneaky Folco deck I looked at recently. This deck also features Folco Boffin (for a little while!) but this deck looks very different! The central idea here is to play a large quantity of Doomed cards early in the game to get your board state in good shape, then drop your threat back to a comfortable 25 with Lore Aragorn, then drop your threat again with Folco to a secret 18!

This list is an updated version of a previous build and the deck description can be found here on the first version of the deck.

A full half of this deck is devoted directly to either card draw or resource acceleration! I’m sure it will get off the ground fairly quickly and I expect to use Aragorn’s threat drop no later than turn 2-3.

It looks like it should work to me! This idea of cheating all the Doomed cards into play and resetting your threat with Lore Aragorn has been around for a while, but Folco’s ability to drop that threat even further and make good use of Strider as well looks very strong. The Hobbits’ ability to easily ready makes this deck work even faster with Peace and Thought.

Since the deck is so focused on getting everything moving fast, there isn’t as much room in the list for as many allies or attachments so the deck won’t every fill an entire table, but with the strong allies in the deck, I expect it to hold its own against most quests.

Test 1 – The Hunt for Gollum

It took me a few turns to get the critical mass of card draw to get all my pieces together but it happened! The first few turns were a little hard to survive and manage, but by the planning phase of turn 6 I had every single card in play that was possible to get on the table.

Turn 5 and 6 were the crucial turns when I was able to draw and draw and drop my threat. By turn 6 I had every possible card in play. At this point you can quest for 25 and still manage some decent combat!

I got the whole Doomed chain going on the first refresh phase and got a massive amount of cards into play!

The deck set up super fast and I got Gandalf into play a couple turns before I hit 48 threat when I reset and sent Folco on his way. The quest was cruel to me and constantly hit me with an Umbar Sentry that immediately surged into another enemy so I had to deal with 2-3 enemies every single turn but it worked. Gandalf is kind of trippy using Narya on himself and Treebeard. Feels very odd… Gandalf can exhaust to ready 2 allies and since he’s an ally, he can basically boost his own combat stats and the stats of one other ally per turn. Very counter-intuitive after using Cirdan so much!

I got the deck entirely set up by around 3-4 and worked my way through the quest winning on turn 10.

The deck works well, but it’s a very odd feeling not even thinking about the planning phase for 2/3 of the game! Everything was in place and there was nothing more for me to do except quest and combat and keep everyone healed up.

The second game beat me up pretty bad. Those engagement effects on the enemies are pretty rough on this deck… I had Treebeard stab Aragorn in the back, then a bad combo of Zealous Traitors cleared my board of allies leaving Sam and Aragorn all alone with a damaged Gandalf. I continued but the Plot ended up raising my threat by an additional 2 every turn which meant I was climbing by 5 threat every turn! I was Doomed! But the game disconnected before I was able to finish again…

This deck is powerful, but this quest might demand more flexibility.

This deck if finely tuned to do a very specific thing and it does it well! It was a rare game that I wasn’t able to do trigger the massive “power up” turn by the 3rd turn or so. I was able to pull of the essential combo in every game no later than turn 5 then be in good shape going into the rest of the quest at 22 threat and 5 solid allies.

Folco and Lore Aragorn are essential for the central idea of the deck and Sam is a very good choice. Denethor would be an alternative to Sam if you wanted some extra resources at the beginning of the game, but you would miss Sam’s willpower and Rosie would be useless.

The ally selection is very strong.

These allies are some of the best in the entire cardpool and once they’re out, you have a very strong board state. You could reduce the amount of allies so you would get the +2 willpower from Strider, but with Sword that Was Broken and Faramir in play, any 1 character you play will have the potential to quest for 2 and make up for it. I think the quantities on the allies included is fine. Gandalf and Treebeard are the most important characters and while they are unlikely to die, it’s possible and you will want backup copies if that happens (or they turn traitorous!). I’m almost thinking you could get away with 2 Gandalfs since you won’t need him in play until you pull of the big card draw Doomed phase and you’re sure to find him, but 3 is probably safer in the long term. If I was to suggest another ally to add it would be Henamarth Riversong. With just a few characters on the board, having the knowledge of what’s coming up in the quest phase would help you utilize each character to their best ability. But when all is set up, you can quest for 15 with only Faramir exhausted so… not a big deal. 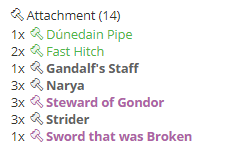 The only suggestion I would have for the attachment lineup would be to increase the quantity on the Sword and Staff to 2 and reduce Narya and Strider to 2x. The Sword that was Broken gives you massive willpower boosting and helpful resource smoothing and the Staff is extremely helpful for getting rid of shadow effects that might be dangerous for allies defending. Narya’s ability is slightly less useful here than usual because it effectively only readies 1 ally (since Gandalf has to exhaust to ready himself) and the resource icon on Gandalf does nothing. Treebeard also has some built in readying, so you don’t always need that Narya readying, but the Staff is good every single turn.

The events really make this deck work. It’s rather incredible to see all these cards chain off each other in one turn! Tighten Our Belts is a little hard to pull off since but still worth it in my opinion. We are Not Idle rankles me a little since there is zero theme but it does thin the deck and help the combo to be a little reliable. The Seeing-Stone was extremely valuable here.

This is obviously a finely tuned deck and while you can swap a couple allies here and there or adjust quantities on your attachments to effect reliability a little, I don’t really have many suggestions for altering the deck much!

This is very clearly a solo deck. It would become a solo deck very quickly even if played with a group!

This is a very unique deck. It’s power level is fairly high and it’s very reliable. It won’t do well against quests that have a lot of ally hate but other than that, it should be good against a wide variety of quests.

The way this deck plays changes the game a lot. It always feels like a different game once you are set up. You carefully plan and execute the first few turns to make sure you pull off the central turn of the deck, then after that, you just power through the quest and basically skip the planning phase for the remainder of the game. You might need to re-play an ally or attachment if something dies or is discarded, but once you accomplish that massive turn, everything is in play or the events aren’t useful anymore so there’s no need to play them!

I don’t think I would enjoy playing this deck against every quest for very long because it would become fairly repetitive and predictable, but that is actually a strength of the deck as well. It will do exactly what it needs to do.

You owe it to yourself to play it a couple times just to see how much you can play in one turn when you get that Peace and Thought/Doomed combo going! And congrats to Marcelf for identifying the Aragorn/Folco combo that lets you drop up to 32 threat in a single turn!

Check the deck out here on RingsDB and give it a play! It’s reliable, strong and unique. Thanks to Marcelf for creating the deck and sharing it with community! 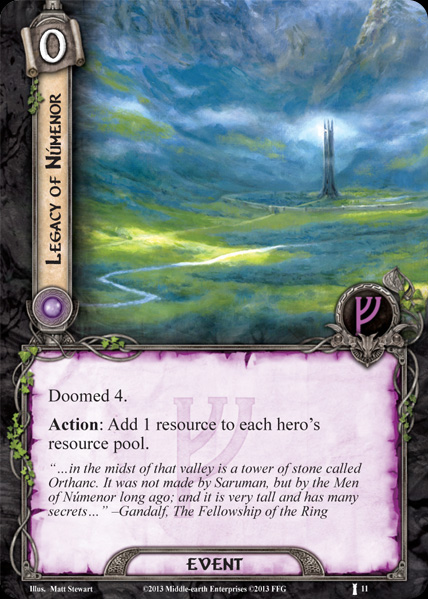