This dwarf deck caught my eye because it doesn’t use the standard dwarf cards like Dain and Legacy of Durin. Dwalin is a little-used hero that I’ve been curious about as well so I’ll load up some Orc heavy quests and give it a try! This deck was created and uploaded to RingsDB by new user Jack McVian. 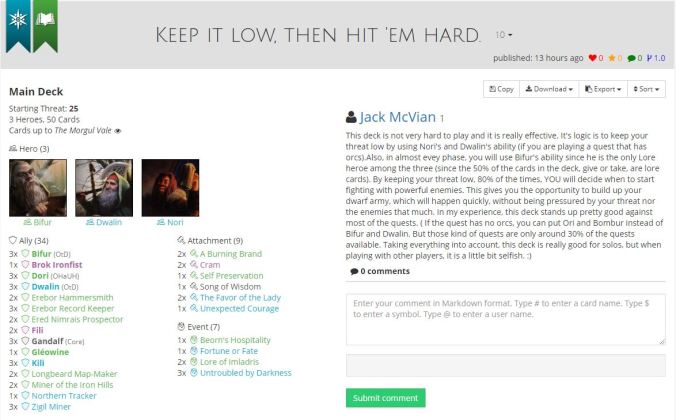 I don’t know if I’ve ever built a Lore/Spirit dwarf deck! This is certainly a new approach for me. With a nice low starting threat and hero abilities to keep the threat low, it should be able to avoid the first few enemies and quest past them for a couple turns to get things set up.

There are plenty of Dwarf allies included here. The resource balance tips towards Lore, but Bifur should be able to keep things fairly balanced. Without a lot of card draw effects or resource generation effects I expect a gradual build up but the threat reduction should help that be feasible.

I notice that Dwalin and Bifur are actually featured twice in the deck! Once as a hero and once as allies! I assume this is an oversight and I’ll sub in the Blue Mountain Trader as a generic replacement.

I don’t have any solid information but I’m going to assume the creator has a limited cardpool since this deck only uses cards up to the Morgul Vale.

I was doing OK until Dark and Dreadful hit me twice and crushed me. With no way to cancel that treachery, I had to call it quits when I lost two heroes and 2 allies to that direct damage.

I tried it two more times but could ramp up willpower fast enough to get through that opening East-Gate location and still be ready to deal with the enemies that accumulated. Dwalin’s base of two attack really needs some ally support to kill enemies like the Goblin Follower. 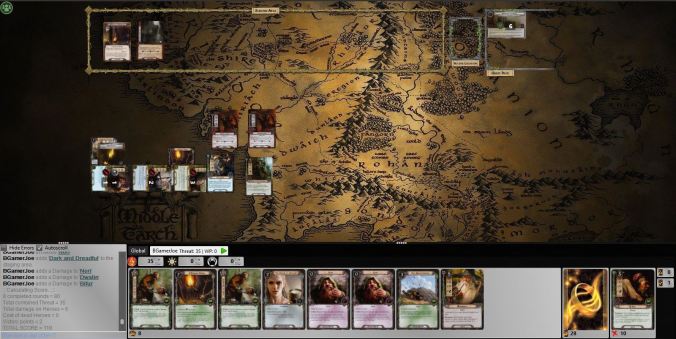 Loss on turn 9. That Dark and Dreadful hit me so many times!

I wanted to keep it underground and keep some Orcs around. This was a long game but I won! My threat kept moving down as I killed off Goblin Swordsmen and I eventually got down to 18 threat at one point. The deck feels like it needs a stout defender. All the heroes has 2 defense and a decent pool of hitpoints, but with no healing allies, as soon as you get a point or two of damage, things become a little scary. The Burning Brand can go on Bifur, but he still doesn’t last long. I feel like swapping the expensive Lore of Imladris for a Warden of Healing might keep those defending heroes alive longer.

I eventually got the board covered with beards and climbed out of the pit on turn 17. 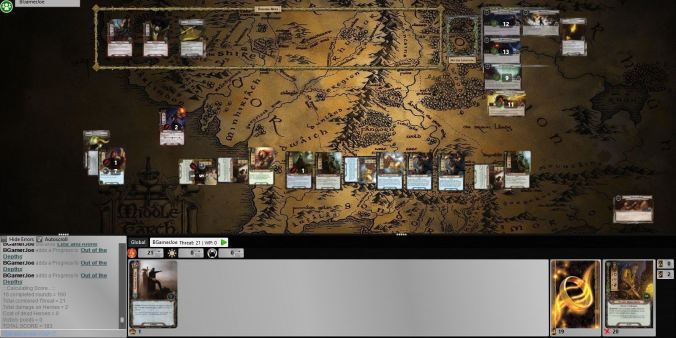 Dark and Dreadful was my setup card and I didn’t see it the rest of the game!

The idea behind this deck is great. Keep your threat down and build up. I think the deck could become more efficient by adding some more card draw effects and bringing some treachery protection. Without Dain’s willpower boost, you can’t afford to lose 2-3 dwarfs at a time to Dark and Dreadful or the Necromancer’s Reach!

I copied the deck and made some tweaks. I personally think dwarves are a challenge without Dain around to boost those questing numbers but it is possible!

For card draw I added Ancient Mathom which combos really well with the Erebor Hammersmith. I also added Legacy of Durin which will be amazing here as well. To boost the threat reduction theme I added Ever My Heart Rises. The deck seems centered around Moria quests already and Ever My Heart Rises is fantastic value for a zero cost card. You get readying and threat reduction all in one! I also swapped out the healing events for Warden of Healing. With a Warden in play, Bifur can defend those goblins forever with his Burning Brand! Test of Will is kind of overplayed, but I really felt it was necessary in Moria for this style of deck. This deck builds up slowly so it’s more than likely to see treacheries like Dark and Dreadful and it can destroy your entire board. I’m OK with dealing with the other treacheries the deck might present, but I don’t like getting the board cleared… I kept the Test of Will at 2x so it’s possible with one core set.

Here is the same deck with those modifications. I think this preserves the core and spirit of the deck while making it ramp up a little faster! 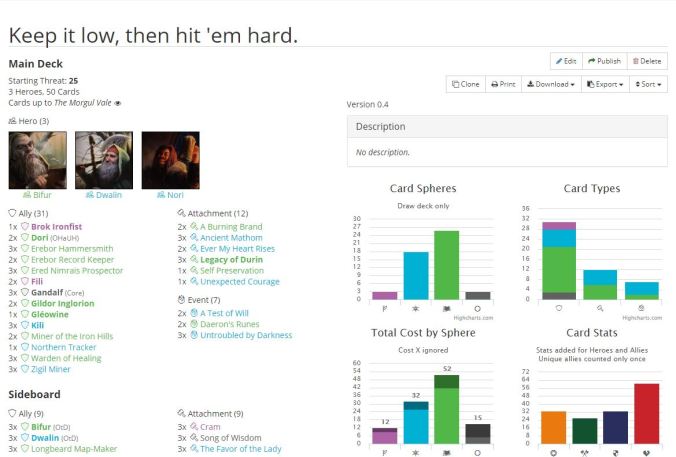 I tried Into the Pit again and while I got location locked on my first attempt, I got things rolling really well on the second play and had a great game. Into The Pit usually pushes your threat up fairly quickly and you end in the 40’s. This deck really kept it low! I got up to 37 at one point but got down to 13 on the final turn! 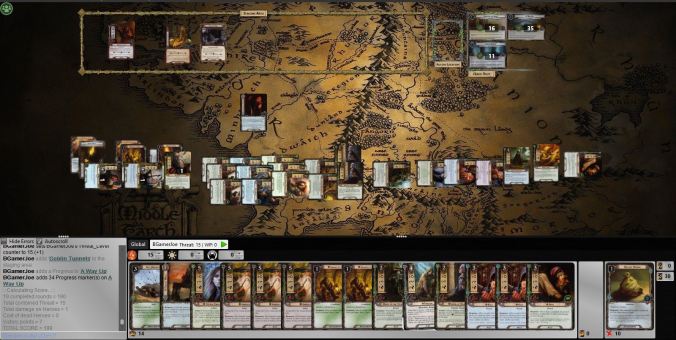 While dwarves are a strong archetype, a lot of their strength comes from Dain. Take that away and you have to be a lot more careful! Leadership is the dwarve’s strongest sphere as well so this deck style has some challenges to overcome. Dwalin is a cool hero, but with no weapons in Spirit and Lore to boost his attack, you really need to have an efficient deck engine running to have the chance to start killing things with regularity.

I like the basic idea found in this deck and I think this deck could be a fun alternative to the now standard Dain Swarm or Dwarven Mining deck types! I think the addition of some reliable healing and increased card draw give the deck a solid chance of keeping that threat low and controlling a game!

Thanks to Jack McVian for posting the deck! Check it out on RingsDB here. Have you build around Dwalin? What kind of deck have you settled on?