Since the LOTR LCG isn’t a competitive card game, people often run more than 50 cards in their decks. 50 cards is a decently large deck for this kind of game and the Arkham LCG has brought that number down to 30. This deck by simone takes it to an entirely new level by doubling the minimum and going for a full 100 cards!

I think I’ve played decks with up to 70 cards in them before but this is the largest I’ve ever tried!

Lore is the sphere to try if you want to go for a monster deck! Each of the heroes has a way to help draw into more cards, but it still looks pretty crazy. I haven’t tried it yet, but I’m dubious as the reliability and efficiency of a deck like this. Not only does it have 100 cards, but a full half of those cards are single copies of cards! There are a smattering of 2x and 3x cards, but with so many singles, it might actually feel more like playing a 150-200 card deck.

Let’s give it a try!

I won but Pippin didn’t make it. I finished the quest on turn 8 at 26 threat and 74 cards left in my deck. The toughest part of the quest was the start since most of the enemies in this quest have low engagement cost. Starting at 25 threat with 3 heroes with 1 defense is not safe in this quest!

I used the Master Hammersmith to recycle a Woodman’s Clearing a couple times to keep my threat low but when Pippin died the hit to my resources hurt.

Test 2 – The Watcher in the Water

Traps are good tech for this quest and card draw really helps you get through the Doors of Durin. I won on turn 14 after setting myself up at stage 1 for about 11 turns. I accomplished both objectives of killing the Watcher and getting through the doors. By the time I wanted to try the doors, I could discard nearly half the alphabet and I hit on a W match with Wrapped! and Woodmen’s Glade.

I had to be careful of my threat level and how to deal with the tentacle enemies, but it was a good game and a hard-earned win. 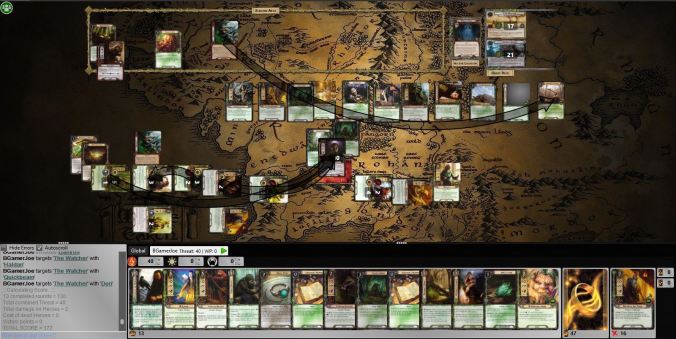 Test 3 – Across the Ettenmoors – Loss

I went from nice control of the staging are to this in one turn. The quest can combo!

The encounter deck wasn’t kind to me. I got enemy after enemy and no locations for poor Haldan. The sidequests built up and I lost control without enough willpower to get rid of any of them at stage 2. I had a huge hand, but I couldn’t quest for more than 9 and I couldn’t defend or kill things!

Test 4 – Temple of the Deceived – Loss

A huge deck of low cost isn’t exactly the smartest deck to bring to this quest but I gave it a shot. I had some entertaining moments but I struggled to get stats on the board. 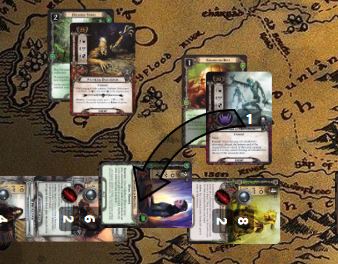 I don’t think I’ve ever successfully defended with a Rivendell Minstrel before!

I only got to one of my Woodmen’s Clearing and eventually my threat got out of control. I knew it would hurt when it happened and eventually I drew a Soulless Cadaver. When he engaged I had to put 13 low-cost cards on the bottom of my deck! 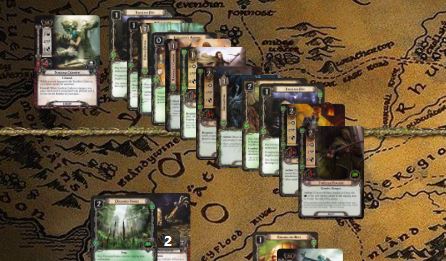 All these cards went to the bottom of my deck!

I threw in the towel on round 18. My traps were useful but I just couldn’t get enough solid numbers on the table to keep up with the encounter deck.

There are a lot of cards in this deck. I’m not sure how to approach this! This is a novelty deck that’s interesting to play because it’s different but it has some drawbacks. It’s nice that each hero helps you draw cards, but their starting stats are a little weak for starting at 25 threat. The heroes all share the dubious honor of having 1 defense which makes taking on enemies a dangerous prospect until you can get either Treebeard or Gildor/Burning Brand down.

The ally ratio seems good in the deck but so many of the allies are support allies of one stripe or another and I ended up questing with them which left very few characters ready for combat in most cases. You really have to carefully manage your resources here! I think it would be helpful to have a few more 2 willpower allies just to help out in the quest phase. The Mirkwood Explorer’s ability isn’t necessarily great for this deck if you’re trying to play with location attachments and Haldan, but his 2 willpower and 2 hitpoints would be helpful. The best allies this deck could add are probably the Wandering Ent and Wellinghall Preserver. The could quest, defend or attack as needed.

I can’t discuss every card here because there’s too many! Looking over the list I can say that I agree with the choices on which card to include the full 3x. Threat reduction, card draw, attachment fetching and recursion and traps all get special treatment but most of the other cards are single copies which turns this deck into “a box of chocolates.” You never know what you’re going to get.

I would probably increase the quantities of healers in the deck. A universal damage treachery (which are all too common) is devastating to this deck since most of the allies are light on hitpoints. Poor Pippin died in a couple of my games because I had no way to heal him. Three healers are hard to catch in a sea of 100 cards!

Rumour from the Earth is a card I’m not sure I’ve every played that was fun to discover! It’s like a repeatable and expensive Henemarth Riversong. I think I’ll try adding that to a deck or two of my own in the future. Ravens of the Misty Mountains is another one that I don’t ever use. I didn’t really use it here but it was interesting to see in my hand.

I did notice that Lembas should probably be cut/replaced since you can only play it if you control a Silvan/Noldor hero.

This was an interesting deck to play just because of how different it was. It’s always fun to draw cards and this deck is good at that but I did struggle to keep control of most of the quests I put it up against.

I think this deck can do a lot of cool things but I had a hard time keeping up with the basic quest/defend/attack tasks and that made the cool things a little harder to appreciate. But for 100 cards, it did pretty good!

You could build a 100 card deck using a more consistent approach and it might be stronger, but it would lack a little of the “toolbox” feel that I think the simone was looking for.

Thanks to simone for making a unique deck and publishing it for us to enjoy. You can find the deck on RingsDB right here and check out the rest of simone’s decks here.