This thematic Tactics/Leadership deck was built and sent to my by RingsDB use SwampFox4776. The hero lineup includes some of the primary characters from the Battle of Pelannor Fields and the new leadership that came out of the losses taken in that battle. With Beorn being the exception, the allies are all Rohan and Gondor which is consistent to that same time and place. 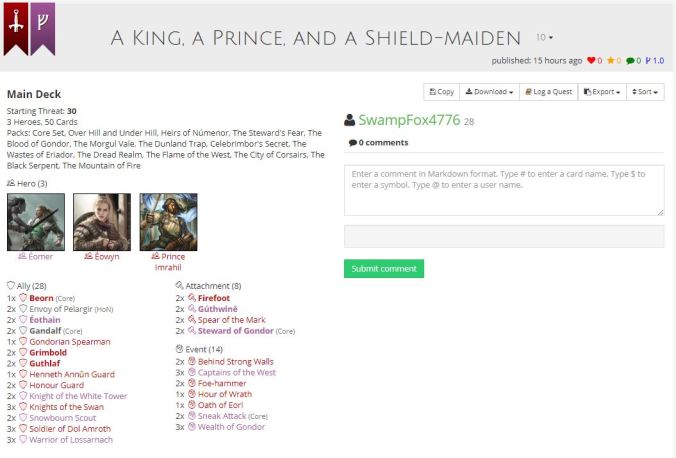 Looking over SwampFox4776’s other decks it looks like thematic decks are his specialty. I see a dwarf deck, a Gondor deck, some Rohan decks and some off beat hobbit decks all with good thematic names.

I like the thematic focus of the deck and I’m looking forward to playing around with T Imrahil who is one of my least used heroes for some reason. I like Captains of the West included here.

Without a way to move enemies back to the staging area and with a standard starting threat level I’m a little worried about getting the ability to use Eomer’s ability. It seems like Eomer takes so real threat control to make consistent over a range of quests. Firefoot and Guthwine will bring him up to 7 attack so if he gets a chance, he should do some good work!

The deck has no des

This was a fairly easy game. I got Firefoot attached on turn 1 and killed that starting Forest Spider right away on the first quest phase.

The combined 6 willpower of Imrahil and Eowyn is solid and if you keep up with the encounter deck and take the enemies out promptly, that 6 plus some help from allies like Grimbold and the Knight of the White Tower can go a long ways. 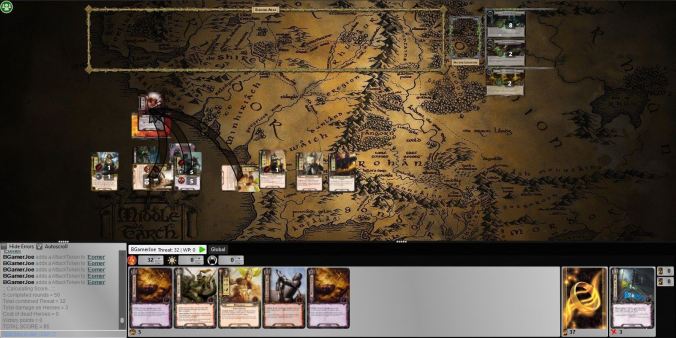 I used Grimbold to stop Ungoliant’s Spawn from attacking me and then destroyed him with Eowyn and Eomer. I finished this game on turn 6 with a 32 ending threat level and 37 cards left in my deck.

I beat it! It turns out Eomer is really good a smashing goblins before you actually enter the East Gate. They’re stuck up in the staging area until you clear that active location and Eomer can trapple them to his heart’s content!

I beat it by killing every enemy as it came at me. My willpower got up to around 12 and that combined with keeping the board clear of enemies did the trick.

After 3 or 4 allies summoned by Imrahil got mercilessly thrown in front of enemies to die, his summons became a death warrant! For some reason I kept finding the tiny Gondor allies when I needed a good defender but it worked out fine.

I put Steward of Gondor on Eomer so I could pay for cards and use his ability but that might not be the best move. I felt like I had a lot more Tactics cards in my hand most of the time and I ended up using Imrahil’s ability much more often than Eomer’s. 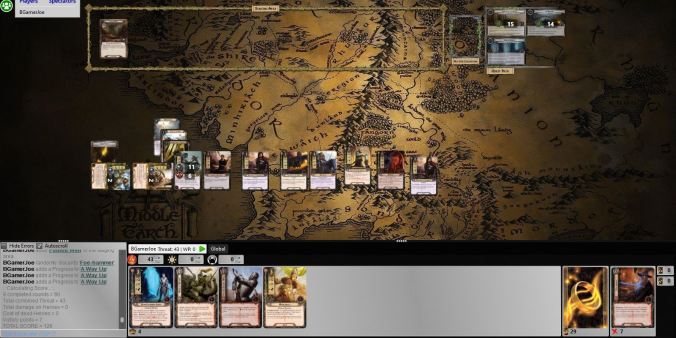 By turn 10 I had built up nice little army of Gondor and Rohan allies.

This isn’t a horribly hard quest but it was a challenge for this deck without any healing. I played a couple times. Things were looking good on my first attempt but OCTGN disconnected. My 2nd and 3rd attepts ended at stage 2 with the encounter deck pushing out my than I could quest through and the damage building up. I basically couldn’t get willpower on the board fast enough to quest through before the nasty treacheries tore me apart.

This was a fun game. Imrahil kept pumping out poor chumps for big mean spiders to eat up and I got Eomer to do a Hour of Wrath and massacre a pile of enemies in one combat phase. I was low on willpower again and it took me a full 15 turns to get through the game but it was always fun. Without Gandalf this deck seems to top out at around 11 willpower and if you’re up against a location with a deep progress pool or you get a surge which fills your staging area, it can be hard to dig yourself out if you get behind. Gandalf is always a welcome sign.

This deck seems to be solidly inspired by events in the book with the high majority of the characters being present at the Battle of Pelannor Fields and it would also be a good representation of the army sent to the Black Gate with Eomer and Imrahil leading Rohan and Gondor respectively. Most of my comments and suggestions will be with these thematic goals in mind but since there is one thematic concession already (Beorn), I may push it outside the box a little in a effort to strengthen the deck.

While this hero combination is thematic and has some interesting abilities, it does present some challenges. Eowyn is a clear questing hero, Eomer is the attacker, although he can periodically quest as well, and then Imrahil has flexible stats and can defend if need be, attack decently well, but he usually ends up questing since there aren’t a lot of questing allies in the deck. That means you won’t have a hero to defend with so you’re allies will be doing most of the defending. I found myself using Imrahil’s ability to summon an ally to defend with most of the time and they would usually die except when I found the Knight of the White Tower. This is a decent system and it almost felt like paying for Feint every turn except I had to face the shadow card.

By the mid game I found I was occasionally missing with Imrahil’s ability. There are 16 allies that have traits in common with Imrahil and that’s actually a fairly low ration of the 28 allies in the deck. With 16/50, that’s around 1 in 3 matches. As you use Imrahil’s ability through the game, it pulls more and more allies out of the deck and more often than not, they don’t return and that ratio gets slimmer and slimmer. I wonder if altering the ally list to include more Gondor/Warrior allies and possibly less Outlands characters would help. The Outlands trait is thematic but it isn’t doing a lot unless you get all 3 of one of them out and that’s fairly difficult to do.

The main issue I had playing quests solo was a lack of willpower. The two Tactics heroes provide a nice base of 6 willpower, but after that, it’s hard to build up more. Tactics and Leadership aren’t the easiest sphere to find efficient questing allies, but I think there are a few options that could help. Since we have a lot of Gondor allies and it might be advantageous to actually up that quantity or Gondor allies to make Imrahil hit every time, it might be worth it to include Visionary Leadership. Most of the Gondor allies have pretty low willpower but if you have several of them and you get that global +1, that can make a substantial difference. A copy of Faramir would do the same thing but he’s harder to get into play. I would probably put 3x Visionary Leadership and 1 or 2 Faramirs. That should really help out with the willpower.

Card draw is always a challenge in these spheres and we have Foe Hammer and Gandalf in this deck. Foe Hammer is relying on 4 weapons and there’s only 2 copies of the event in the deck. I’d encourage at least 5 weapons and if you’re hoping to get card draw with them, I’d push the Foe Hammer up to 3x. The Spear of the Mark is a great card on Eomer if you’re able to use his ability on high engagement level enemies. I didn’t find that that happened very often. I feel like you have to build a specialized deck around Eomer to get staging area attacks to work very well and well I got a few attacks off with him in the quest phase, I don’t think that should necessarily be the focus of this deck. I might add a couple copies of Raiment of War because it could go on a lot of Gondor allies and make them solid defenders instead of chumps and you could put it on either Eomer or Imrahil if you draw it early to trigger Foe Hammer.

There are some fun events in the deck here. Hour of Wrath is amazing with powered up Eowyn and it can make for some epic moments so I would keep that! Captains of the West gives you some burst willpower and action advantage since all the heroes are nobles, but it does take a resource investment. I have mixed feelings about this card here because it was helpful in my first games but less helpful after I made my own version of the deck with Visionary Leadership and increased card draw. I would keep at least one copy for fun theme value. Oath of Eorl is a fun 1x card that can make some epic plays as well.

I would increase Gandalf and Sneak Attack to 3x each but I realize the core set only includes 2 Sneak Attacks so that can be a challenge. I would say Gandalf’s card draw option is probably the default way to use him unless you’re in dire straits.

As it is, I’m not sure Wealth of Gondor is pulling its weight. When card draw is scarce, it’s hard to want to use an entire card to get a resource, especially if you have Steward of Gondor pumping out resources but no cards in your hand! If the card draw was increased with more Gandalfs/Sneak Attacks/Valiant Sacrifices, I think it could be a solid inclusion.

It’s not strictly thematic, but with Imrahil pulling out allies that often chump block, Horn of Gondor might be a good attachment to include in the deck for extra resources. If you attach it to Imrahil, it can basically pay for his ability every turn!

I realize I just suggested a lot of possible changes to the deck but it’s all in an effort to let the deck get cards on the table and make some good games. After including some willpower buffs, altering the ally lineup to almost exclusively match Imrahil’s traits, and beefing up card draw with increased weapons, Foe Hammers, Gandalfs and Valiant Sacrifice, this is what I settled on: 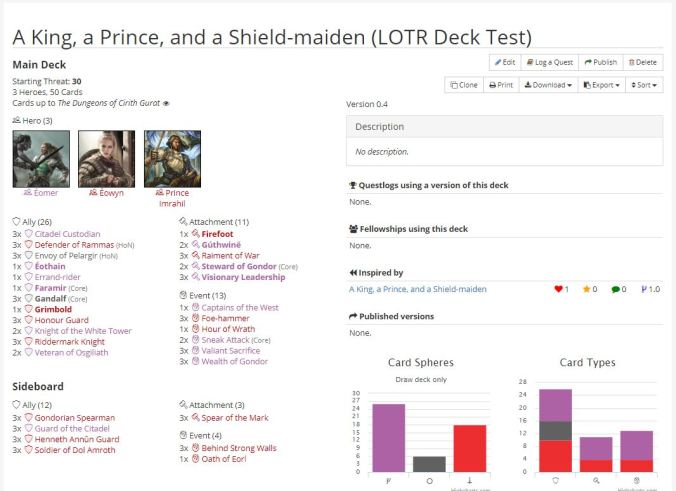 I think I kept the basic theme and kept the list it within the reach of one core set but I know I added a few more products necessary to build the deck. I played a couple games and was able to beat Druadan Forest and Into the Pit and had a good time doing it.

I found Captains of the West sitting in my hand a good bit so I cut it to 1x. This game of Druadan Forest was really fun. Not easy but I made it and had a solid army by the end.

Not sure why I have both Sneak Attacks in hand here… But I hit 32 willpower on the last stage here.

I like the thematic tightness of this deck and I actually started to have fun with T Imrahil (for some reason I never want to play him and I have a semi-irrational grudge against him) by my last plays. With a little tweaking of willpower and card draw, this deck can hum along nicely! My main advice is play to your strengths and make sure Imrahil’s ability won’t be wasted, and don’t be afraid to include plenty of “acceleration” cards to get cards into your hand and on to the table.

Thanks to SwampFox4776 for building the deck and sending it my way! You can check it out on RingsDB here. Click on the deck and give it a like and leave your comments there! Also check out the rest of SwampFox4776’s decks which all do a great job of maintaining strong theme.