I’ve been a little distracted with Con of the Rings and a computer game (Ultimate General: Civil War) that’s been eating up my evening time lately and I’ve neglected this blog! This deck was sent to me a month ago by RingsDB user Sfrug and I’m just now getting to it. 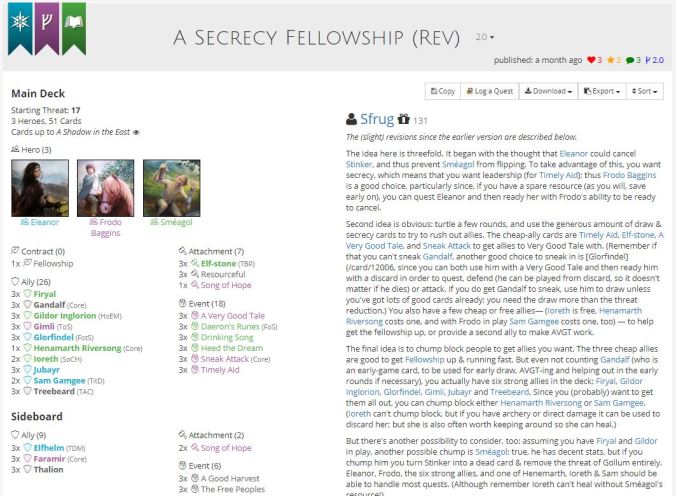 The deck description is very helpful and I recommend you give it a read. There are some tricks to running a solid Fellowship Contract deck and this description hits on a bunch of good points.

I’ve been playing a lot of Fellowship decks lately with some of the same tricks built in so this should feel familiar in some ways. I’ve found tri-sphere decks to be a little risky as Fellowship decks just because if your “cheaty” ways of getting allies out fail, it takes forever to actually pay for these 3-5 cost allies. Resourcefuls will help but I’ve still found tri-sphere a little sketchy in my builds so I’ll be watching for that.

The description mentions using Eleanor to cancel the Stinker treachery and that’s all well and good but then you’ll have to reveal two more cards which could make things go downhill fast. You don’t want to lose Smeagol but you also don’t want to take two encounter cards! I have a hard time making Eleanor work in solo decks in general so I’m going to be watching her and seeing if she pulls her weight. At least shes’s a decently low threat hero and that’s worth a lot!

I got my fellowship assembled on turn 4 and then had things well in hand. I didn’t win until turn 11 but that was partially due to cautious play. My final fellowship included, Treebeard, Ioreth, Gimli, Glorfindel, Firyal, and Jubayr in addition to my heroes. 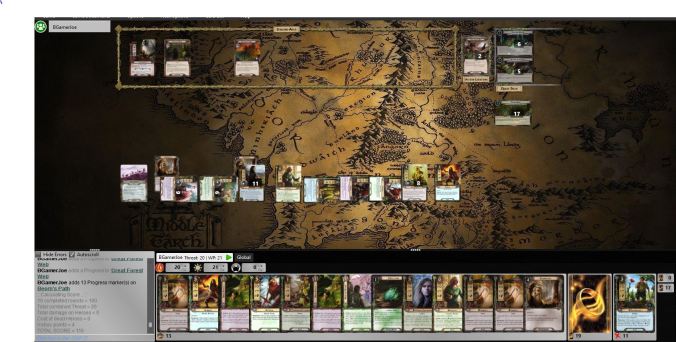 I didn’t use Eleanor’s ability in this game but I did defend with her once. When you compare her with Firyal, she doesn’t come out looking too good. She has one willpower and she doesn’t get to both quest and use her ability and Firyal has 3 willpower, is an ally and gets to use both her willpower and ability! In a solo deck, Firyal is a clear winner for me! Eleanor is there from turn 1 and can protect you from the very beginning of the game, which can be valuable, but I’m still a little underwhelmed by her in solo play.

Stinker never came up and I might feel differently after dealing with Gollum a time or two.

The first time I played this I was having a great game, then realized I hadn’t shuffled Stinkers into the encounter deck so I had to restart. I got a slow start and failed at questing very quickly on the second attempt so I looked hard for extra willpower in my opening hand on the next try.

The 3rd game was a lot of fun and I ended up winning although I had to sit at stage 3 for a long time as enemies kept popping up faster than I could engage them with my low threat!

Once you get those big allies into play, things feel very secure.

This was a fun game and this sort of high cost ally deck is perfect to counter the punishment the undead enemies dish out to low cast cards.

It took a little while, but I won the game. I had some bad luck finding the last key location at the last stage so it took longer than it should have but it was a good game.

I keep working at keeping my threat low through the entire game with this deck, but as a solo deck, it can be a bad thing. I keep getting into the mid game of a quest and I have my board set up and there are 2+ enemies in the staging are that I couldn’t deal with earlier. Even after I’m ready to take them out, it can take many turns to clean them all up because I can only engage one at a time. Weird problem to have! I need to stop using Frodo’s ability so much once I’m at a “safe point” in the game.

This was a solid game and I ended up winning. It took a while because I was playing a little conservatively while trying to manage location build up at the same time. I used Eleanor to cancel Gollum’s flip but it sure hurts when you do it. 2 more cards can be a big game swing. I won on turn 17.

Frodo really makes this deck for me. He’s such a solid hero. Gollum is nice for his extremely low threat cost, but I would have to think hard before putting him in a deck like this. He kind of makes Spirit mandatory so you can cancel his Gollum effect and in this deck, Eleanor provides that safety which is OK but you’re basically spending an entire hero slot to make up for a hero. It’s almost counterproductive in a way. I’m kind of surprised there’s no Test of Will in this deck because that could help cancel Gollum’s betrayal without revealing another card.

Gollum is an interesting hero for a fellowship deck because there’s real advantages to killing him off after you get to 9 characters and then have the opportunity to play at 10th. Just let an attack go undefended and your Smeagol/Gollum problem is gone. If you have your allies in play, you don’t need those resources very much anyway. The exception here is Ioreth who requires Lore resources to heal so that’s a little awkward but still, it’s nice to have options for getting rid of Smeagol before he stabs you in the back. I think Folco Boffin has the same strengths but less drawbacks that Smeagol in a lot of ways. If you run all Hobbit heroes, he’s 4 threat instead of 3 but he has a beneficial effect when he leaves rather than a constant threat of a nasty effect.

This hero combination puts the deck deep into Secrecy, but with the Fellowship contract, you have minimal access to Secrecy cards, most notably the Celduin Traveler and Ithilien Lookout. This leaves Resourceful and Timely Aid as the only cards that benefit the player when the deck is in Secrecy. Resourceful is great on Frodo so he can use his ability and still have resources to spend on events and an ally or two, but unfortunately, Resourceful can’t be attached to Gollum. Several of the high cost allies are in Lore which means you’re entirely relying on the “cheaty” methods of playing those allies. Between Timely Aid, A Very Good Tale and Elf Stone, there are enough ways to get those allies into play, but personally I find tri-sphere a little dangerous for a high-cost ally deck. I would argue this deck needs Timely Aid in it’s opening hand or a Sneak Attack/Gandalf combo or it will struggle in the first few turns and possible just flounder. With a combined willpower of 5 and minimal ways to get more down on turn 1 and 2, it really needs that Timely Aid right away. Sam Gamgee is a great turn 1 drop and so is Henamarth Riversong so it’s possible to quest for a solid 8 on turn 1, but if you don’t seen one or two of those strong opening cards in your hand, it can be a rough game.

I think dual sphere is slightly “safer” for a high cost ally fellowship deck just so you can play them conventionally if they get in your hand with no discount options for them. With only one Lore hero, it can take a long time to build up the 4 or five resources for those larger allies. But on the other hand, tri sphere gives you access to more  key cards. Having Sam available for only 1 resource in this deck is very helpful. A Good Harvest is in the Sideboard and I would probably sub out Song of Hope so I could add at least one copy of this resource smoothing event. In the late game, I didn’t have much issue with resources (unless I had bumped Smeagol off), but in that early game, tri-sphere resource management can slow the deck down and this event would help.

I like all the decisions that go into making a Fellowship deck! The ratio of cheap to powerful allies is an important decision but so is the number of each ally you include in a deck. You can go for a full 3x of all these big allies so you’re reasonably sure to build up a consistent board every game, or you can go for more 1x and 2x allies which lets cards like Timely Aid and A Very Good Tale fire more reliably. If you have 4 allies already in play and you play A Very Good Tale, those duplicate cards are basically working against you. I had both Timely Aid and A Very Good Tale fail for me more than once while using this deck. But on the positive side, every ally I put into play was a solid and helpful asset. Both approaches can certainly work, but the 3x approach makes these acceleration event cards slightly less effective.

The deck works well. I don’t think it’s the very fastest or “safest” Fellowship deck, but as long as you can get an ally or two out right away, there’s a strong likelihood of building up a fine board state and winning most games. I beat most of the quests I played with this deck but several of them took several attempts just because I got a slow start. I’ve noticed a slow start can be extra deadly for a Fellowship deck because if you get behind and let too much build up in the staging area, it can be hard to overcome that in the late game. If the quests amps up at the same time your deck reaches peak willpower and you already have a full staging area, you have to be very careful how you manage your 9 characters to avoid getting either location locked if you quest conservatively to make sure you can manage enemies, or get swarmed by enemies as you quest aggressively to keep ahead of the threat curve.

I’m still not 100% sold on Smeagol yet, especially if he requires another hero slot to help cancel his Gollum transformation. He didn’t manage to flip very often in my games, but when he did it hurt, and even when I was able to cancel his flip, it hurt with that extra encounter card. Three threat is incredibly low, but it seems so easy to just take Folco instead for 4.

I enjoyed playing this deck and playing it helped me think through the Fellowship decks I’ve been working on. Thanks to Sfrug for building the deck and sending it my way! I’m very sorry it’s taken me this long to actually write this article. I have a backlog of 4-6 decks I need to work on now!