This Ent deck was built and sent to me by RingsDB user Christian_Medic. 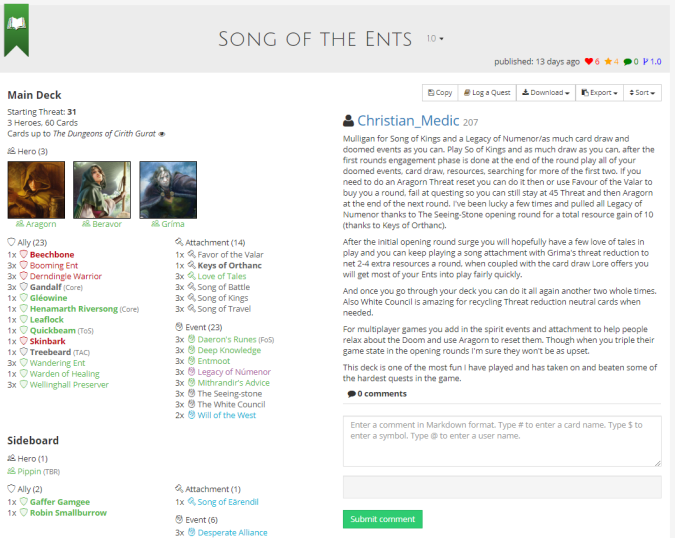 Ents are good. They’re cheap and have tons of stats, but the challenge is always getting them on the board fast enough. This deck uses Grima for instant resource acceleration to get those heavy allies on the board as soon as possible and then Aragorn to get threat back down to normal levels.

I’m not sure if I’m excited about the 1x Treebeard. He seems good enough in this deck to warrant at least 2 copies.

This looks like a “brute force” deck! With plenty of stats on the allies and tons of card draw and resource acceleration to get them on the board, and then Aragorn’s ability to rest the threat, you should be able to get way ahead of the encounter deck if things function properly on the first couple turns. Just looking at it, it appears the Legacy of Numenor/Song of Kings is the crucial combo to get off to a fast start. If that combo is slow to appear in your hand, it might be a slower start but Grima provides that crucial 4th resource right away and Beravor provides the card draw to keep the deck moving from turn 1. The 60 card count scares me a little, especially when that Song of Kings/Legacy of Numenor combo is so essential. That extra 10 cards won’t help that combo come together any faster.

I got my resource/card draw combo online turn 1 and jacked my threat into the 40’s on turn 1. It took my a while to get through the quest and I got into the mid 40’s on my second time through my threat dial, but I had a massive board by the end of the game. I got the Watchful Eyes Condition attachment on all 3 heroes by the end of the game but it didn’t even matter because I had so many huge allies out that I didn’t even need the heroes.

Things came together. I won on the 10th turn after treading water for more turns that I thought I would have to on stage 1. Henemarth helped me plan out turns but I kept getting that -1 willpower treachery on the turns I was going to push hard on the quest and then the next turn I had two enemies to deal with and couldn’t quest as hard.

I went up to 50 threat twice and used The White Council to shuffle Favor of the Valar back into my deck to recycle it.

I played it a second time and I struggled for a few turns but then I smashed the second stage in one turn and completed the quest on turn 8. It took a long time to find the Song of Kings to play Legacy of Numenor to really get going. I also only drew 1 Love of Tales early which slowed down resources. I had a bunch of card draw in my opening hand and by the time my first planning phase was done I had drawn 10 cards through player card effects and I had 32 cards left in the deck.

I played Gandalf once to kill of a bothersome enemy but I’m wondering if the deck doesn’t really need him. He’s versatile, but pretty expensive, especially when you have options for putting big allies on the table. I’m also wondering if more copies of Favor of the Valar could replace The White Council. I’m not sure what else you would want to recycle. Maybe some card draw events but I feel the threat security is probably better. 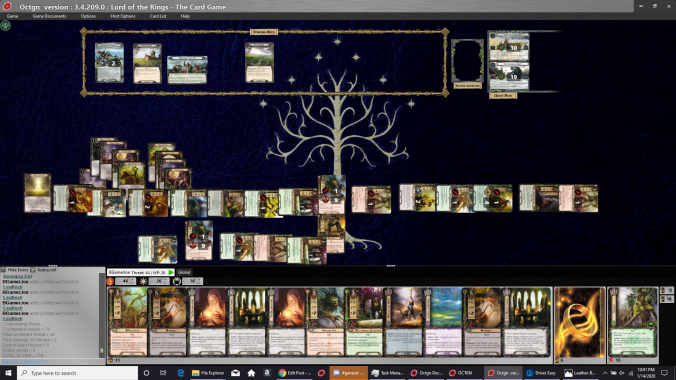 This one forces you to move quickly and dumps damage on your characters and that kind of worked perfectly for this deck. The ents ate up that damage and were able to manage it well enough with the Wellinghall Preserver. I’m finding there’s several cards in the deck that I just don’t play. I have yet to play Will of the West and I rarely play The White Council unless I’m getting close to 50 threat for the third time. I might consider swapping some of those out for some more copies of the unique Ents and/or another copy of The Keys of Orthanc. 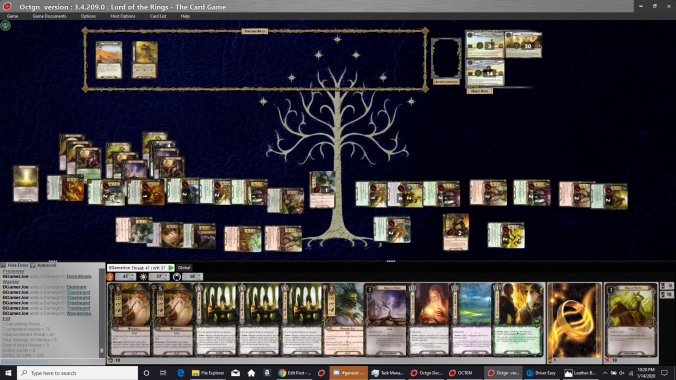 I finished on the 8th turn. I find that by the last stage of most any quest I can just smash through it in one turn. By the time turn 8 or 9 comes around I’ve pretty much emptied the deck and have most of the ent allies in play and my willpower potential is up to around 25-30.

I failed my first and second attempt but I got a good start on my third try and it was a great game ending in a win.

I waited until the refresh phase of the 3rd turn to do the doom ramp and by the fourth turn, I had a massive amount of stats on the board. Enough to quest through the Underground Lake in one turn!

The end of the planning phase on turn 4..

It took me a while to find the forge to remake the sword or I could have won sooner. I finished the quest on turn 14. I still had 3 Gandalfs in my hand for threat reduction in addition to more recycled Favor of the Valor opportunities.

I’m not sure the deck really needs the Spirit/Will of the West comnbo. In this game, I ran my deck deck but didn’t need to recycle it because all that was in the discard pile was Card Draw/Resource Acceleration which I no longer needed. I could have played Will of the West if some allies had died, but there was no real reason to do it in this case. I wonder if you could cut the deck down by a few cards by removing that combo. This was a long game and I still didn’t need it.

Once you get a critical mass of these ents out, it’s pretty hard to lose!

This deck can really explode when the combos come together. It’s impressive to see that table turn when you do that big turn and put so many allies out. It’s kind of weird because you don’t get to really use all those new allies you just put out since they’re slow ents but the next turn will be awesome!

After playing a bunch of games with this deck my main comment is that it could be slimmed down and streamlined a little bit. The deck relies on a couple very specific combos to do it’s trick. 60 cards make that less likely to happen. There’s lots of card draw to help it come together but if you don’t find Song of Kings in the first couple rounds, it’s going to be rough.

In most games that don’t go on too long, I think the Spirit cards aren’t necessary and could easily be dropped and it would actually help the deck ramp up faster because you wouldn’t be drawing those cards that don’t have an immediate effect. Taking out these 6 cards would increase the density of Ent cards which would improve the card draw you get off Ent Moot as well. Currently there’s only 20 cards in the deck with the Ent trat which means you’ll be drawing 1 or 2 on average.

If you drop the Spirit suite of cards, it becomes easier to drop Love of Tales as well. With 9 songs in the deck, Love of Tales can net you a lot of resources if you get Love of Tales out early. If you drop Song of Travel, it becomes a little less efficient. If you cut all 3 Love of Tales, you getting down to almost 50  which makes your combos more likely and your Ent Moots more hasty.

On the other hand, if you ever want to play this style of deck in a multiplayer game, you should keep Song of Travel and add 3 Desperate Alliance so Aragorn can drop everyone’s threat.

I made some cuts and adjustments and here’s a slimmer version of the same deck. It doesn’t have as many late game options or back up plans for late game threat, but it combos and accelerates a little faster in my couple games of testing.

I upped the Ent card count to 23/50 and added second copies of high impact cards like Treebeard and Keys of Orthanc. I’m not claiming this version is better, but it might be more consistent in getting that crucial early game explosion while maintaining the spirit of the original deck.

I played a few games with this and worked pretty well. I almost beat Mount Gundabad but I got too clever trying to abuse Favor of the Valor by questing for 0 while at 49 threat but then I got a Doomed 1 treachery. The Doom took me to 50, popped me back to 45 with Favor of the Valar, then threated myself out because I quested for 0 with cards in the staging area. I could have done that better…

I enjoyed playing ents again! It’s been a while. This deck gets the ents out in a big way! That turn you play all those acceleration cards is thematically kind of like the Ent Moot. You’re questing along for a little and doing OK, then all of the sudden, THE ENTS ARE HERE! And then the decide to actually do something on the following turn.

The threat manipulation takes some care, and you can kill yourself if you try to be too clever, but it’s fun flirting with death a little here and there. My main criticism is the deck feels a little bloated and has a few cards that I didn’t feel that were necessary. The central idea works great and the heroes are perfectly selected to make it work.

If you want to flirt with threat death and crush everything with a herd of Ents, this deck is for you!

You can find the deck on RingsDB here. Thanks to Christian Medic for sending it my way!