I thought this would be quick post, but I ended up playing it several times. This variation on one of the standard forms of the Ent deck was created by Rings user ff0x. 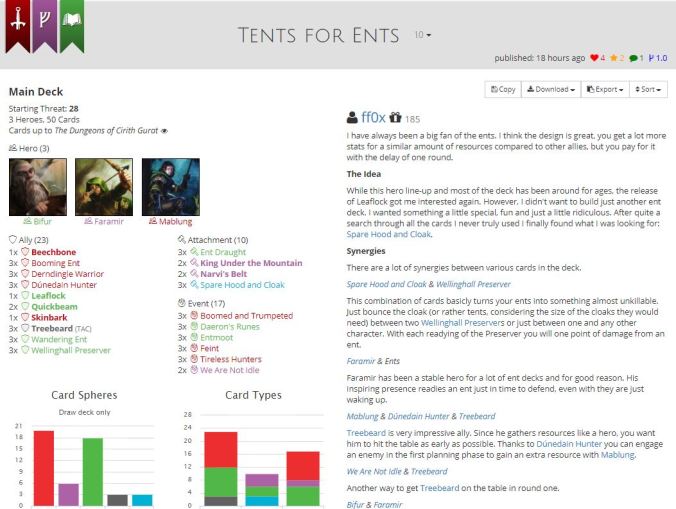 The description covers all you need to know if you’ve played ents before. Well written and clear.

This deck is standard procedure for ents except for the addition of Spare Hood and Cloak. Playing Spare Hood and Cloak demands a resource match, so the deck includes Narvi’s Belt to get the Spirit resource icon. It runs a couple other different cards than the form I use, but it looks solid.

This actually went remarkably well! The deck had the right starting willpower to keep pace with the quest. I kept on top of things and built up my board fairly quickly and ended with 12 allies on the board after 10 turns. I never got the Cloak out this game.

I thought the Heirs of Numenor quests might be a fun challenge for the ents since they have well-rounded stats. This quest was actually really fun with the ents. Imagine a herd of ents in a bar brawl!

With 29 ent traited cards in the deck, Entmoot was a solid form of card draw, and one time I hit all 5 ent cards!

I actually beat this quest twice. The largest challenge was threat. Collateral Damage spiked my threat a couple times and it had no way to come down! The description mentions Favor of the Valar as a good threat management card if that is a problem and I agree. The deck will have the resources to pay for it by the time you need it.

The infamous Into Ithilien! This was an epic play! It ended with me going into the last stage at 49 threat with 8 enemies engaged and hoping to slide out and survive with Siege questing through the last stage in one turn! I got stuck on stage 3 for too long and I couldn’t engage any enemies and they kept piling up! The game lasted for 10 turns which is incredibly long for this quest and it was the closest game I’ve played in a long time! I ended with every character 1hp away from death, at 49 threat and one hero surviving after having to defend against all 8 enemies in one turn!

This modern quest pushes faster than Ents like to move, but I was still able to win one of two games.

The archery really hit me here and it was nice to have the hitpoints and healing of the Preserver, but again, I was never actually able to get the Cloak into play and doing work! I think I only got it into play and working at the end of one game out of the 5 or 6 games I played with the deck. This deck was actually a pretty good match for this quest, as long as you can get the starting progress on the quest card on turn 1. Then you can choose to quest hard or battle hard on subsequent turns as the need arises.

The game lasted 10 turns again, and drew into half the cards of the deck.

The Spare Hood and Cloak idea is cool, and can really help manage damage on your big ents, but it may be more of a neat trick than an efficient method. The combo is passing the Cloak off to the Wellinghall Preserver so he can trigger his healing response more than once a turn.

The Spare Hood method also can have the advantage of controlled readying so you can defend or attack with the ideal character, but that is also tricky to manage. I would say if you’re looking for fun, this Cloak trick is cool (and funny), but a couple copies of Warden of Healing is probably better damage control in the long run.

If the Cloak was removed, it would free up a couple more card slots since you would no longer need Narvi’s Belt. After playing several games, I can confidently say that Song of Travel would be a solid replacement to Narvi’s Belt and cost 1 less. Mablung builds up resources and the demand for Lore resources is almost has high as Tactics. Bifur never needs to spend his resources as anything but Lore.

In a solo context, Tireless Hunters didn’t do much for the deck, but it could be very helpful with other players on the board. In solo play, Wait No Longer might be a good replacement.

We Are Not Idle is a useful card just so you can Treebeard out turn one. Steward of Gondor could be included to boost the deck even further, but I applaud anyone who chooses not to use it when the deck functions fine without it.

Dunedain Hunter is another good card that I haven’t used in a Ent deck. You can play an ent in the planning phase, the drop the hunter, engage an enemy, get a resource and ready the ent you just played! Very good choice.

If there’s anything I would want more if it would be card draw. Entmoot and Daeron’s Runes are good, but I found myself with too many resources and enough cards in the late game.Gandalf actually might be helpful here.

It’s a good, solid ent deck with a twist that gives new interest. The twist isn’t the most efficient, but its entertaining.

Thanks to ff0x for posting the deck! Head over to Ringsdb and give it a like and play it if ents in hoods sound fun to you!

How am I going to survive this?? Ithilien insanity