“Road is forgotten, but not by Wild Men. Over hill and behind
hill it lies still under grass and tree, there behind Rimmon and down to
Don, and back at the end to Horse-men’s road. Wild Men will show you that
road. Then you will kill gorgyn and drive away bad dark with bright iron,
and Wild Men can go back to sleep in the wild woods.”

.Secret Paths Through the Druadan Forest was created and posted on Ringsdb by Beorn.

The deck is a thematic (but viable) deck representing Rohan’s march through the Wose’s secret paths to come to the aid of Gondor at the siege of Minis Tirith. The deck only uses two heroes and can stay in Secrecy mode for a few turns. 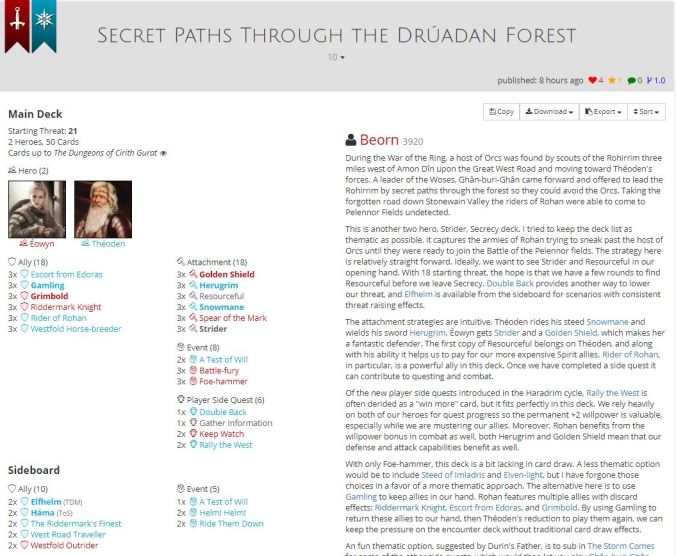 The deck description is solid as is all Beorn’s writing.

I was excited to see this deck pop up on Ringsdb because I was playing a very similar decklist just the other night, except I used “Manly Theoden” instead of Santa and the Spirit Glorfindel crutch instead of going “real secrecy” with only two heroes. It’s a sidequest deck which is a bold build, and it only has two heroes which is even bolder!

Rally the West is a card that I really enjoy in the right deck and this is the perfect place for it. Boosting willpower will boost attack and defense as well when the Golden Shield and Herugrim are in play. The decklist is tight with 3x of almost every card.

Test 1 Journey Down the Anduin

With a mere 18 starting threat level, the deck has plenty of time to prepare for facing the 30 engagement level Hill Troll. Things came together well and I was able to complete 3 sidequests before moving on to stage 2. With Strider attached and Rally the West completed, Eowyn can defend for 8 with Golden Shield! She brushed away the troll with no trouble at all but killing the troll took a little more effort. Even with the WP boost, Spirit Theoden was only attacking for 7 with Herugrim, boosted to 9 with the ever-ready Rider of Rohan.

The next turn I was able to use Battle-Fury and kill off the troll with plenty of progress on stage 1 which launched me straight into stage 2. I was able to blitz straight through stage 2 in 2 turns which left me little to clean up at stage 3.

I kept my character count down to 5 most of the game so Eowyn would quest without exhausting with Strider so I could defend with her as well. 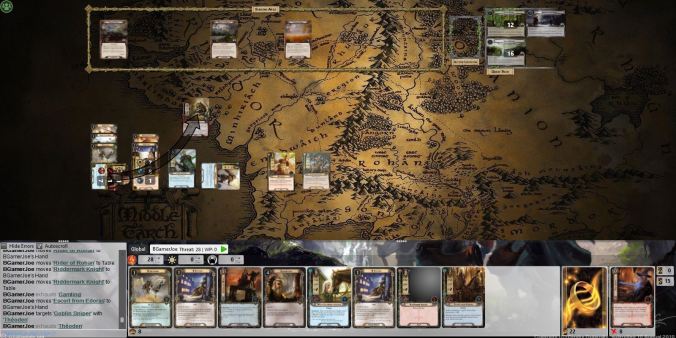 This was a bad quest choice. The deck isn’t designed to withstand firepower of that magnitude and I didn’t get far. I tried it for theme’s sake and it was a massacre.

This was a lot of fun and a nice thematic fit since the troop of Rohan soldiers came close to Amon Din on their way to Minas Tirith.

With high willpower, low threat and plenty of sidequests to complete, this was an excellent quest/deck match up. It still was not easy to kill off enemies, but with low threat, you always have a choice on when to engage an enemy.

An odd situation came up here where I was ready to play an ally, but pushing my character count to 6 actually made things worse for me.

I triggered Eowyn’s +9 mid game to kill off an enemy so I wouldn’t have to face shadow chaining again the following turn. My threat was low enough when I finally chose to move to stage 2 I didn’t have to engage Ghulat until I was ready. 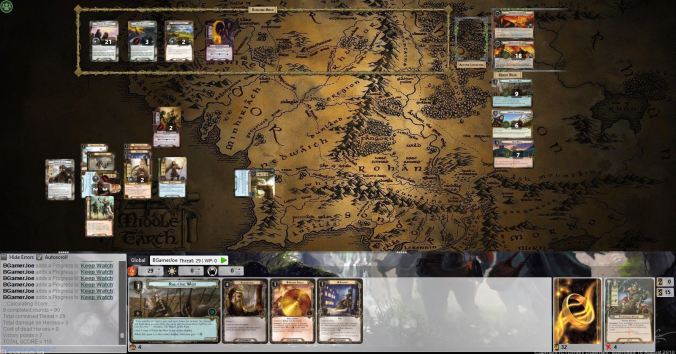 It was an exciting game because Shadow effects can go crazy, but it was a solid win with 21 saved and 3 lost villagers.

It thought his quest would be fun since you start out with 1 hero and it would be easier since I wouldn’t have to save a 3rd hero!

I started with Firyal since she’s amazing and gives you that starting willpower you need to get off the ground. I actually put Strider on her since I had it in hand on turn one. It helped a lot early game but was probably not the best choice for the long game since I didn’t get the extra boosts off the equipment on the Rohan heroes later.

I had no problem with willpower here and I even completed Keeping Watch, but I wasn’t able to kill off enemies and the deck eventually buckled under weight of the Uruk Captain on the last stage.

These are all great choices. There’s so many Rohan allies at this point, it takes some real paring down to get to 50 cards that really work together.

I like seeing cards like Battle-Fury and Rally the West getting used to good effect. They are powerful cards, but take the right deck for them to really shine.

There are some cards that could be included to maximize effiency for this deck, but they would compromise the theme which is clearly important here. Including Folco Boffin in the hero lineup would technically make this a better deck since it could immediately start at -1 threat cost, but it’s not necessary.

I found card draw a little sparse here, but there aren’t a lot of options in Spirit and Tactics. Elven Light isn’t an option with Tactics Eowyn and while included, Foe-Hammer is harder to trigger in a Rohan deck since Herugrim needs to exhaust to be useful. Ancient Mathom is pretty much the only option that would slot in without any other modifications, and Hobbit knick-knacks don’t exactly fit with our Rohan theme…

The sidequests are excellent here, each one contributing plenty to what the deck can do.

I found myself wishing for a copy of Unexpected Courage so I could play down more than three allies at a time and still get two uses out of Eowyn with all her toys. One copy of Windfola might be worth it too just to get Eowyn up to 8WP! One copy isn’t reliable, but with 3x Horse Breeders, it might show up.

Most two-hero decks don’t really work and this one does! Its faithful to the inspiring thematic idea, its fun to play and it actually can beat some quests. Its not a power deck that can quest for 50+, but I don’t think that was the goal.

I like it and I recommend you go play the deck and go give it a like on Ringsdb!

Thanks to Beorn for creating and posting another excellent and creative deck!

Merry Christmas to you all!