This song deck was posted recently by Rings user (and community genius) Seastan.

This deck is notable for several reasons. First, it relies heavily on songs, with 17 song cards included in the list. Second, it contains literally zero allies. Three heroes are all you get.

The deck is focused around the theme of Frodo and Bilbo in Rivendell, specifically in the “Hall of Fire,” where songs and tales were frequently told.

My first thought was “How is this deck going to kill anything?” On closer inspection, Gondorian Fire should solve that problem, though without the standard Steward of Gondor, you might actually have to work for it instead of cheesing it.

Test 1 – Journey Down the Anduin

I played the deck against this quest before I watched his demonstration video, but my game went remarkably similar to his play. The deck took about 8-10 turns to set up before engaging the hill troll.  There are a few really low threat enemies in the deck that can give you some trouble early in the game and some of the shadow effects are deadly (defender doesn’t count his defense stat), but I was able to manage the early game and get set up with 18 willpower on Frodo and two copies of Gondorian Fire on Erestor. 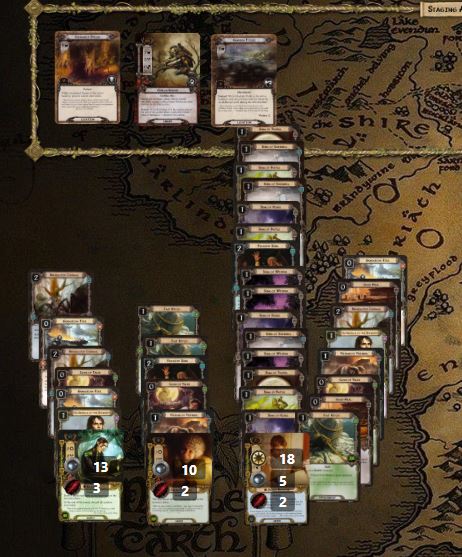 Powered up but sniped to death. Not sure why you can’t see the second sniper here…

At that point I killed the hill troll, spent two turns on stage two, then disaster struck. My threat was down to 12 and I revealed a second copy of Goblin Sniper while drawing cards for stage 3! I killed all the other enemies but I couldn’t optionally engage the Snipers. I tried holding out for a million turns while I slowly brought my threat up to 48, but with my deck emptied and all three Will of the West used up, my Lembas only lasted so long before the snipers started to take down my hobbits. Stupid snipers. I had control of the scenario and would have won if I hadn’t played 3 copies of Elrond’s Council on the turn before launching into stage 3.

I did play it again and was able to beat it.

Test 2 – Conflict at the Carrock

This has some scarier treacheries, but overall, this played very similarly to Journey Down the Anduin. It took about 6 turns to get set up, and my threat was still near 20 when the Trolls showed up (in spite of two Frightened Beast treacheries that raised my threat by 10+ each time). With low threat and the ability to easily quest for 20+, I was able to bring one troll down at a time and burn it with fire! I did need two copies of Gondorian Fire attached to Erestor to successfully dispatch a troll in one attack.

With two Gondorian’s Fire, Erestor is able to incinerate a troll in one attack

This game I chose attach most songs to Frodo and some to Bilbo so I would have more flexible willpower numbers. That way I was able to stall at stage 1 easier and control my setup. Frodo ended with 14WP and Bilbo had 7WP.

I had a Goblin Sniper in the staging area, but Frodo could absorb the damage as threat each turn. With 4 actions out of Erestor, 2 with Bilbo, and 4 with Frodo, I was able to engage and defend and attack 2 enemies per round when I needed to.

I was able to kill all four unique trolls and a Hill Troll by the end of turn 11. 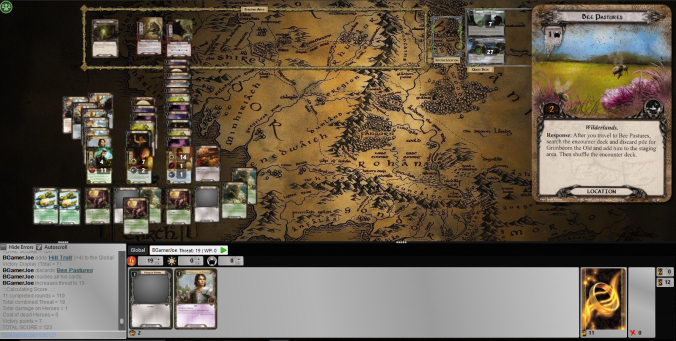 While I believe that this deck could potentially beat this quest, it might take many plays to get lucky enough to pull it off. I played three times and got halfway through once, but I kept getting a second enemy engaged with me through a shadow effect or a treachery well before I was ready to deal with it.

The archery also was a bit of a problem. With Frodo defending, I had to take the archery on Erestor and hope I got a nice steady stream of Lembas to keep him alive.

It looks like I forgot to discard a shadow card there…

This deck is optimized for setting up fast, and that what it needs to survive. In spite of having no allies, it has a little of everything. It has a huge quester, a defender, an attacker, healing and threat reduction

There was a corner case where I really wanted a Dunedain Remedy and it would have saved a game for me, but that was only because I had two of those Goblin Snipers chipping away at me with no way to engage them for another 15 turns!

My only other thought was Song of Hope might be a worthwhile replacement for Song of Earendil (when playing solo). You would have to get Song of Kings out first, but it would be free and give more flexibility in WP numbers later in the game. Song of Earendil gives  you a card when you play it, so it may ultimately be the better choice.

Break Into Song seems like a natural choice for a devoted “Song Deck,” but with Erestor discarding events and with so many readying attachments, it wouldn’t be helpful at all.

While a little “gimmicky,” I think you could bring this to a multiplayer game and still do OK. It doesn’t take any unique cards, so it doesn’t step on many toes. It does like to stall a little at the beginning of the game, so it won’t be super helpful on those first couple turn, but it can quest for 25 and kill bosses near the end game, which is is considerably more than your friends will expect out of a song deck.

This is the strongest and fastest Song Deck I’ve tried so far! It’s not great for every quest, but it was able to take down 5 trolls in Conflict at the Carrock!

While this deck showcases the power of Fireside Song, its almost more about the power of Erester. There’s no way this style of deck would work without the insane card draw that lets you get all those tiny cards out that come together to make a strong deck.

Thanks to Seastan for publishing this deck and for all his other numerous contributions to the community!

You can see him play against Journey Down the Anduin here.