There seems to be a dwarf revival! The RingsDB homepage has been dominated by dwarf decks all week! I’m happy to see dwarves get some play again! Maybe the recent errata has been healthy for the dwarves. It’s true that they have some very powerful options available that can become overpowered if built “correctly,” but I don’t think they deserve the “disdain” that sometimes gets thrown at them. The “Dwarf swarm” style of deck was heavily developed early in the game’s lifetime, but there are other options for building fun dwarf decks with the Mining Deck being one of the most interesting.

This mining deck was created and uploaded to RingsDB by WingfootRanger who has published man fine decks, including a couple that I have featured on this blog.

This is a classic lineup of heroes. Dain supports questing and defends while Nori and Ori quest and provide momentum with card draw and stability with threat reduction. The Mining cards that aren’t usually seen in the usual swarm include the Ered Luin Miner, Ered Nimrais Prospector, Hidden Cache, and the Zigil Miner and King Under the Mountain are more common, but central to making this archetype work.

Mining decks benefit from either scouting the top cards through the Imladris Stargazer or they tend to run a high number of 2-cost cards to the Miner will generate plenty of money. Looking over the cost curve we have 24 cards costing 2 plus the Ered Luin Miner and Hidden Caches which brings the total number of”mineable” cards up to 30. With 30/50 cards bringing in money, the Zigil Miner should easily hit one success with an average attempt.

I’m surprised to see the Dwarf Pipe in the sideboard instead of in the deck. This style of deck can mill pretty fast and the pipe can relieve some pressure and recycle that Hidden Cache or a card you might want to play later. 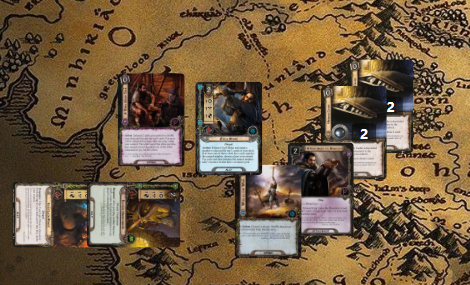 A Very Good Tale got me a Miner and 4 resources!

This deck is feels like a cross between some of the focused mining decks I’ve played and the classic dwarf swarm. Between Legacy of Durin and the Zigil Miner, you can string that planning phase out way longer that it seems possible!

End of the planning phase on turn 3

I beat the scenario on turn 9 with a dominant board state. The slowest part of the deck was getting enough attack out to kill things off. The only ally with more than 1 base attack is the Veteran Axehand and you have to get Narvi’s Belt out before you can play him conventionally. Once the Magic Ring was on Dain, he could ready after defending to boost attack levels and killing enemies became easier.

In 9 turns I exhausted the deck twice and ended at 24 threat. Nori does serious work! 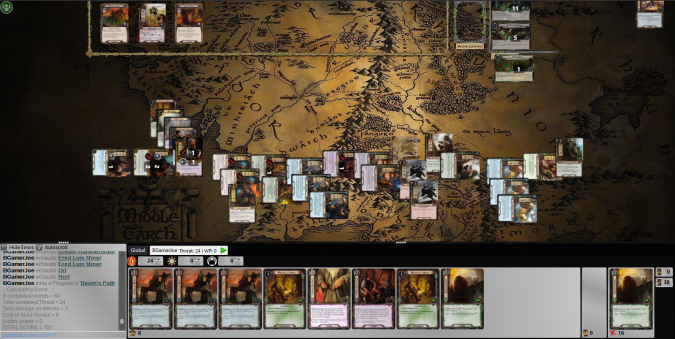 I thought it would be funny to make the Dwarves mine in the ocean… With all these allies I knew this deck would handle sailing just fine.

The deck decisively beat the quest. The first couple turns were a little slow, but it quickly picked up and I was safely set up by turn 5 with 25 allies sprawled across the entire board by turn 7.

I stayed on course just fine and beat the game on turn 9 after cycling the deck twice and getting nearly all the allies in the deck on the board. I accomplished both win conditions by killing all the ships and questing through the last stage just for fun. 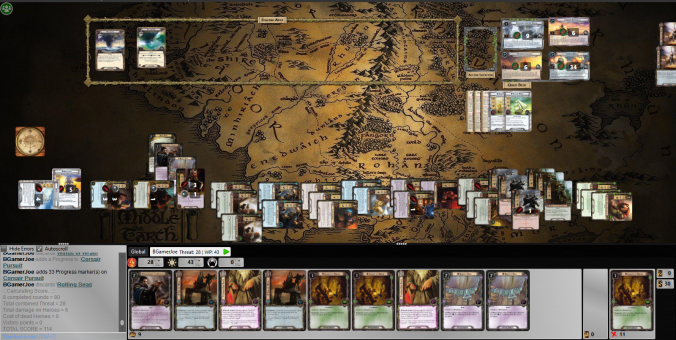 I found that the miner didn’t hit every time, but I found it helpful to use the Record Keeper to ready him and try again if I had excess Lore resources but needed Spirit or Leadership cash.

Another victory! It’s hard to overcome the dwarf swarm. Ironically, the trickiest part at one point was engaging the enemies so I could kill them, but with my threat hovering around 23 for the last part of the game, I could only engage one enemy at a time!

I beat the quest on turn 8 with the same mass of allies out on the board. 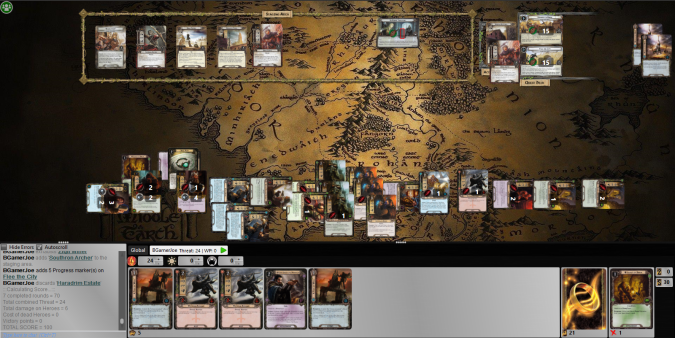 This is one of the strongest combinations of dwarf heroes available (which is saying something). It gives you access to the three strongest spheres for dwarves, boosts willpower, keeps threat low and keeps your hand full of cards.

The deck clearly works so I don’t have many suggestions but I have a few comments.

Its great to see a solid substitute for Steward Of Gondor for the dwarves! This deck runs just fine without Steward or the now-corrected We Are Not Idle. The mining subtheme keeps the deck interesting and makes you work for your resources. It honestly provided more resources than I expected. With only 3/5 cards providing benefits when mined, I was dubious, but it certainly provided enough cash to work with. I enjoyed using the Record Keeper’s ability to mine another time when I needed more Leadership or Spirit resources. The other resource acceleration card in the deck is Tighten Our Belts. It can be a great play on turn 1, but it basically becomes a dead card for the rest of the game. I played it once in my three games with the deck. If I had one suggestion, it might be to cut it out and add a Dwarven Shield or two to help Dain out with Defense.

I was happy to see no Imladris Stargazer in the deck as well. For one thing it slows the game down to be constantly scrying your deck and rearranging for the miners, and on the other hand, no elf would help the dwarves find their ore anyway! The blind mining was more thematic and fun, if a little less profitable. With the deck built with a solid number of 2-cost cards, it works fine without the Stargazer and that’s one less card to have to pay for as well!

Card draw is plenty strong! I’m still surprised that Legacy of Durin hasn’t been changed so it exhausts. Between Ori, King Under the Mountain, and Daeron’s Runes we have  decent card draw, but that Legacy of Durin is crazy card draw. Near the end of a game I was able to play Will of the West, put around 15 cards back in my deck and proceed to draw/mine through the entire deck and empty it during that very same planning phase.

The ally selection works just fine. I thought I would wish for a more consistent set of 2-cost allies, but the Record Keepers were helpful for readying and the Longbeard Elders and Gloin were the core of questing numbers. I don’t much care for the effect on the Ered Nimrais Prospector, so I didn’t trigger it more than a couple times, but he’s a 2-cost dwarf so he’s worth inclusion.

The attachment selection is strong with the highlight for me being the new Magic Ring. Dain is the obvious defender here, but if he defends with no readying, the remaining dwarves might have a hard time killing enemies. For the cost of one threat, you can ready him and nearly double your attack power since most of these allies have 1 attack.

With the resource distribution fairly even and flexible resource acceleration through the Miners, I wasn’t sure which hero to give Narvi’s Belt. I put it on Dain, but I didn’t find it very useful except to get the Tactics Veteran Axehands out on the board. It might be more efficient to cut the third copy and add a single Hardy Leadership. With no healing and no defense boosts, even the dwarves’ hitpoints exhaust eventually! I was forced to chump block a few times and I was starting to feel the pressure of the archery in Escape from Umbar.

The dwarf pipe is in the sideboard, but I wish it could be fit into the main deck. Playing with that pipe really reinforces the Mining theme for me. If you keep adding those Hidden Caches to the bottom of your deck you really hit the mother-lode eventually!

I appreciated most of the events with A Very Good Tale taking the spotlight. Not only does it build up the swarm even faster, it works with the mining theme, and it makes good use of the free but high costed Ered Luin Miner. With all the other card draw and resource acceleration, I found Daeron’s Runes and Tighten our Belts superfluous. It’s nice to get value out of some of the duplicates with Daeron’s runes but Legacy of Durin makes all other card draw feel a little lame…

This would be a strong deck in either setting. Since its very tribal, it doesn’t step on too many toes making it easy to bring to a multiplayer game. It certainly ramps up fast enough to play with others. The only weakness for multiplayer is the dwarves’ selfish nature which deprives them of any Ranged or Sentinel characters.

This is both a strong and a fun deck. It’s mining theme works, but with Legacy of Durin and Dain, it still has the same general feel as the classic dwarf swarm deck. It certainly has a “swarmy” feel! It avoids a couple of the “power cards” that define the Dwarf Swarm “power deck,” but it has a lot of similarities. It’s more thematic and interesting than the older decks that utilized Steward, Lure of Moria and We are Not Idle, but it’s still fun and very powerful.

Thanks to WingfootRanger for sharing another quality deck! You can check it out on RingsDB here and see his other decks on his profile here.

Lastly, I want to get on a little soapbox here and tell people to stop maligning the dwarves! Sure, there’s a dwarf powerdeck that feels unbalanced, but there are many, many more possibilities for the dwarves that we miss when we dismiss this entire set of cards! And if you like playing dwarves, don’t let others’ jabs and grumpiness discourage you from playing them.  I’ve recently played several dwarf decks that explore ideas well outside of the style that was developed during the first couple years of the game and I’ve had good fun!  Baruk Khazad! Khazâd ai-mênu!