I must confess I’ve never played a one hero deck before. The closest I’ve come is starting with Fatty Bolger in Escape from Mount Gram. This one-hero deck was submitted for testing by RingsDB user RedSpider. This deck explores the thematic possibility of Frodo not continuing the journey after Rivendell and the Fellowship proceeding without him. The only allies included are unique allies that could have come along with Aragorn after the Council of Elrond.

In his deck submission, RedSpider indicated that this isn’t supposed to be a power deck, but was inspired by thinking through “alternate LOTR history,” and the deck started to work for him. He also indicated that he had the quests from The Road Darkens in mind when he created the deck. This makes sense although the mandatory inclusion of Frodo as a Fellowship hero kind of spoils the idea of Frodo not continuing the quest…

I like my hero cards so I’m usually less than enthusiastic about playing decks with less than 3 heroes, but I’m always ready to try something new (at least once)! I’m not expecting the deck to be viable against all quests, but I’m hoping to find at least a couple quests that it can beat.

The deck looks tricky to get running. The resource acceleration and sphere smoothing appear to be the biggest challenges in the first couple turns of a game. One of the challenges is that many of the foundational cards for the deck are in the Leadership sphere while the only hero is Lore. Lore Aragorn is clearly a good choice for a one-hero deck since he can afford to quest unsuccesfuly for a few turns while the decks sets up and then drop down to 12 threat again and hopefully have the board state to continue.

My main concern looking at the deck “on paper” is the lack of card draw. “Novelty decks” like this usually need to get cards in hand fast so they can get their combos in place. I see 2x Ancient Mathom, Ally Legolas, Gandalf’s Staff and the Prepare for Battle sidequest, but none of the cards can be played right away. They each rely on another card being in play before they do any good. Since our starting hero is Lore, I’m surprised Deep Knowledge and Daeron’s Runes aren’t included.

I gave it four tries but couldn’t get the deck off the ground. The deck has a hard time getting those first cards out. Of the 53 cards in the deck, only 23 are Lore or neutral, and of those only 12 can be played on turn 1. The shadow effects in this quest regularly discard attachments so even if I got a Resourceful into play right away, a spider would take it away! A Forest Spider even ate my Magic Ring once…

While the cards are all useful eventually, finding useful cards on turn 1 is hard. Here I got Resourceful out, but it was discarded by the Spider in short order…

I was usually able to last 2-4 turns before I took too much undefended damage and lost. 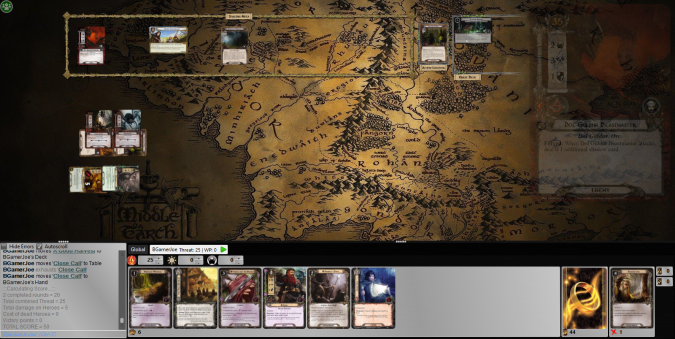 After a generous and thematic Council of Elrond, I got to start the game with a free Gandalf, and went on to win the game! Questing for 6 turn one with a great defender ready is a much better place to start a game! The game turned a little dark when I revealed Lust for the Ring on my first draw and had to attach it to Aragorn! I just didn’t use the ring the entire time and removed the Condition Attachment later in the game.

It still took a while to get access to Leadership and Spirit so the deck didn’t really get going until midway through the game when I finally got The Sword that was Broken and Celebrian Stone into play.

I was able to pick up members of the Fellowship with Elf-stone along the way which felt good. I didn’t have to face an enemy until turn 4-5 and that gave me the breathing room to get some cards into play. 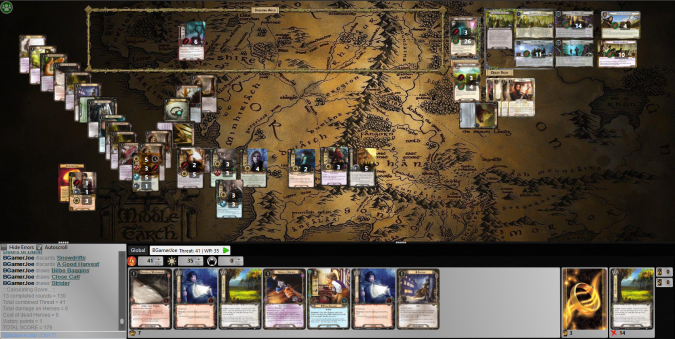 When the deck is set up, it draws plenty of cards, averaging 3-4 every turn, but it took a long time to get there. Since Gandalf took care of my questing for a bit, I actually used Gildor’s action to dig through the top of my deck to find cards that would help me more than the cards in my hand. I wish I had drawn the Dunedain Pipe a lot earlier since it would have accomplished a similar function without so many “lost stats.”

Collecting enough attack power to damage the Watcher in the Water was a bit of a trick, but once the Sword is in play and Aragorn has some readying, you can get 8-11 willpower devoted to the quest and still leave nearly every character ready.

The most epic moment of the quest came when I got to play The Free Peoples on the last turn and blast through the Doors of Durin with 35 willpower.

I beat the quest on turn 14 at 41 threat and with 3 cards left in my deck. Getting that Gandalf ally into play turn 1 was probably the key to my victory.

Again, I had trouble getting my first cards on the table. I couldn’t get any additional willpower on the board for too many turns so I ended up getting locked up questing for 2 while there was 10-12 in the staging area and my threat went up which brought enemies down and ended my game.

Aragorn is one of the few heroes that could make a single-hero deck actually work. The ability to bring your threat all the way back down to 12 is so huge.

This deck is an ambitious project to say the least. I’ve pretty much assumed that starting with one hero was impossible and the fact that I won a quest with this proves that it is possible. I think this deck has some good things going for it but it could be focused to make it more consistent.

There’s two things I think that could be done to make this deck more consistent and viable in a solo setting. First, I think the decklist could be paired down to 50 cards with 3x of a lot more cards. There are 23 card titles that only have 1x in the deck. Unless all those 23 cards are equally powerful, that means you have reduced your chance of drawing that all-important Strider and Steward. Having all these unique cards is awesome if you can get them all into play, you have to survive those first few turns or it’s all useless. So I might recommend streamlining the deck to include less titles and more copies of the cards that will really pull their weight.

My other main suggestion is to up the quantity of card draw that can be used immediately. There are nice options for card draw, but nothing that can be used on turn 1 when its most needed. With a super-low starting threat of 12 Deep Knowledge seems like a really good option that you can play on turn. It doesn’t slow down your play of other cards since it only costs threat and you can easily compensate for the threat later if you get a good start on the game.

Instead of going through each card here, I just copied the deck and made some alterations and tried it a few times with some success. I basically cut anything I didn’t think was in necessary, brought up the quantities of several foundational cards like Strider and Steward and added some free card draw that could be used right away. I tried to keep close to the theme, but I did add a couple support allies.

Here’s the version I came up with: 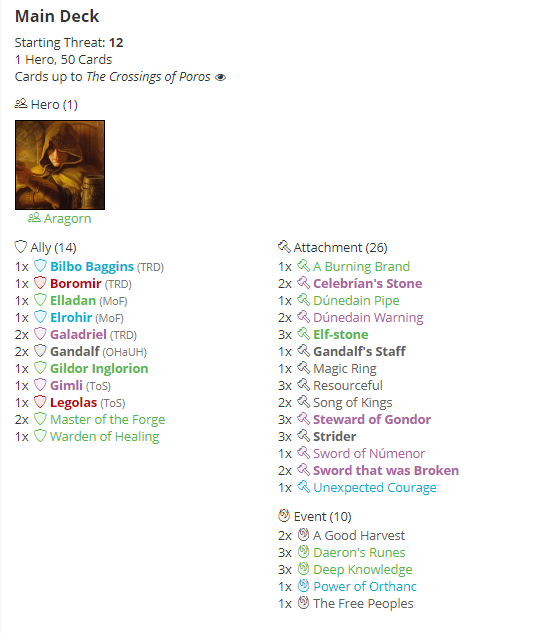 I would say Strider is the card you want to see in your opening hand with Resourceful a close second. There were also 5 Restricted attachments and I brought it down to 3 with 2 copies of Celebrian Stone and a Sword of Numenor.  I added Master of the Forge since he will always hit and get your crucial attachments into play a lot faster, and the Warden of Healing for some more durability.

I played this version successfully against Passage Through Mirkwood twice in a row, The Rings Goes South once and it beat Journey Down the Anduin in one out of two plays. It’s not as strictly thematic and it takes some of the “fun cards” out, but I think it brings a little more consistency and speed to the first few turns of a game.

I didn’t try it, but it may give the deck a better start to bring Falco Boffin along as a second hero for the first few turns. That second resource and extra 2 willpower could make a big difference. You’d start at 18 threat and Aragorn’s mid-game threat drop wouldn’t be as dramatic, but it might be worth it.

I will be impressed with any deck that functions with only one hero! This deck plenty of things going for it, but I think it could use some tweaks to help it power up faster and be more consistent. I brutal truth is that you can’t afford to take lower-powered cards for theme’s sake when you’re already trying to run a deck with one hero!

I enjoyed giving this deck a try and it sparked my interest in some other options for 1 and 2 hero decks. Thanks to RedSpider for sending the deck my way!

A modified version beats Journey Down the Anduin

2 thoughts on “Deck #38 The Fellowship of the King”