This is a fantastic deck that I’ve played several times before the deck was sent to my blog for testing. It was submitted to this blog for some advice on making it more viable in solo games. This deck has a very specific and effective goal it works towards and it looks very odd “on paper,” but it works in a delightfuly smashing way.

The basic goal of the deck is to play Gandalf and Beorn/Elrond (depending on what’s needed) every turn through the last half of a game to annihilate everything that comes off the encounter deck. It works surprisingly well and having the choice between Gandalf’s powerful effects every single turn is hugely powerful. If Reinforcements proves too expensive or hard to find, Sneak Attack works as a junior version of the same effect. Once the deck is emptied, there is a nice loop between Tome of Atanatar, Reinforcements/Sneak Attack and Second Breakfast that can let you play Reinforcements or Sneak Attack every turn for the rest of the game.

I’ve played some two player games with it and it works very well, even when it hits bumps and things don’t go it’s way (when Na’asiyah discards all events in your hand!). Here’s a playthrough using a version of it in a two-player game of Nightmare The Thing in the Depths if you want to see the basic idea in action.

Here is the decklist as published: 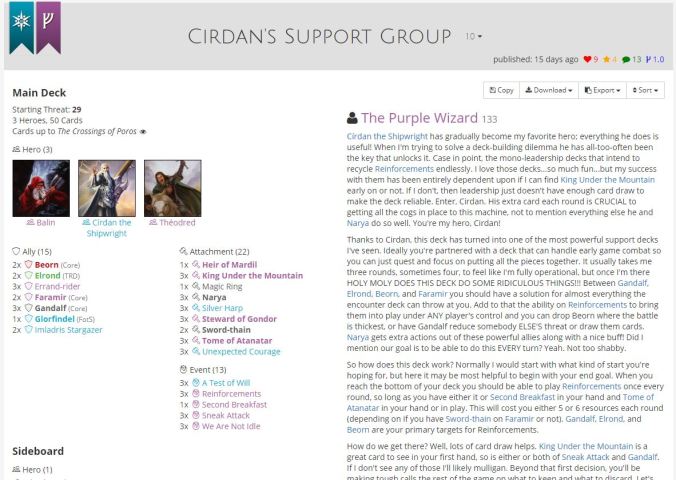 The deck was submitted with a list of alterations The Purple Wizard has made to move it towards making it easier to play as a solo deck. Those alterations bring the deck to look like this: 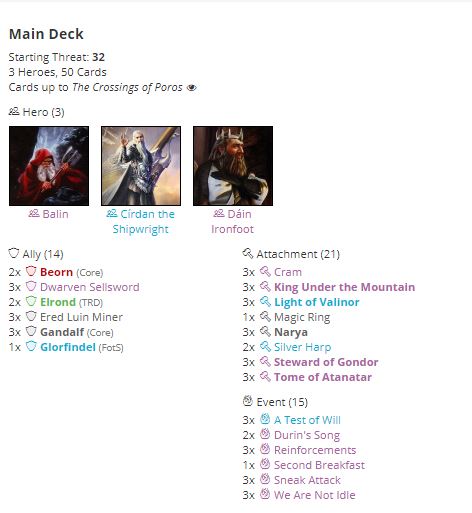 My Goal here is to run the deck through a variety of quests making any modifications I like along the way to make this as solid a solo deck as possible.

Before I go further I should map out the Reinforcements loop that can happen every turn once set up. The entire loop takes 2 turns to repeat itself and takes 12 resources.

It took me some brain pain to actually identify the process but here it is as best as I can describe it:

It’s a tricky deck and not having used it as a solo deck before I wanted to try it on something easy.

Things went well and I had an easy win by turn 6 without any danger of losing.

I had a fantastic opening turn where I got several of the powerful attachments needed in my starting hand.

I played my first copy of Reinforcements on turn 4 or so. I played Gandalf to draw 3 cards, Elrond healed 3 damage off Cirdan, then the defended against both of the enemies engaged with me, readied with Narya and killed them both off (with Dain’s help).

By the final turn I had 6 cards left in my deck and plenty of cards in hand. My main thought playing through this quest was the willpower was fairly low. There aren’t many allies in the deck and I wish I had a few more characters to get progress on the quest. There were a couple turns I wasn’t able to clear the active location which could have become a problem if it was a harder quest.

Win on turn 6 with a lot of potential to recur Reinforcements if the game had been longer.

For my next play I think I’ll add a couple allies to increase willpower and have targets to spread archery damage around on. I’m removing a couple Durin’s Songs and a Cram to add 3x Blue Mountain Traders. They aren’t fantastic allies, but they will quest for 2 with Dain up, they can be played with Cirdan’s Steward resources and they have 2 hitpoints.

This went well although I played it a little different. I ended up using Reinforcements during the end of the quest phase just as often as a during the combat phase. Those Southron Archers are a pain in the neck so having Gandalf knock them out in the staging area with his 4 direct damage was sometimes safer than taking the enemy and fighting him during the combat phase. I used Elrond more often than Beorn to heal off the archery damage that built up from the archery.

I didn’t get a great opening hand, but I beat the quest on turn 8 without ever getting desperate.

The additional allies seemed helpful. I played a second run and it was tougher and it took 13 turns but I won again. The In Enemy Territory sidequest is very dangerous for this deck… By the mid game your hand will be pretty full of cards and it’s no fun giving them all up! I fouled up the Reinforcements loop again, but I was able to continue playing it long enough to win and not hurt by that mistake.

A longer and tougher game on the second try

This was an easy win on turn 10. If I had drawn the Shivering Bank stage 4 and discarded my hand I would have been in a lot of pain, but as it was, I spent a single turn on stage 4 and a single turn on stage 5 and escaped. Dain and his dwarves really help the questing numbers. I’m liking this version. Between the dwarf allies and Narya, I was killing half the enemies handily without needing to use a Sneak Attack or Reinforcements. While this kind of dilutes the centerpiece of the deck, I think it’s actually not a bad thing. Being able to save some resources and handle the combat phase with what’s on the board is helpful for building up your board state.

I got a new variation on the deck from the Purple Wizard halfway through writing this! This version drops Dain and all the dwarf allies and uses Denethor as the third hero for some lower threat and a boost of resources at the beginning of the game. 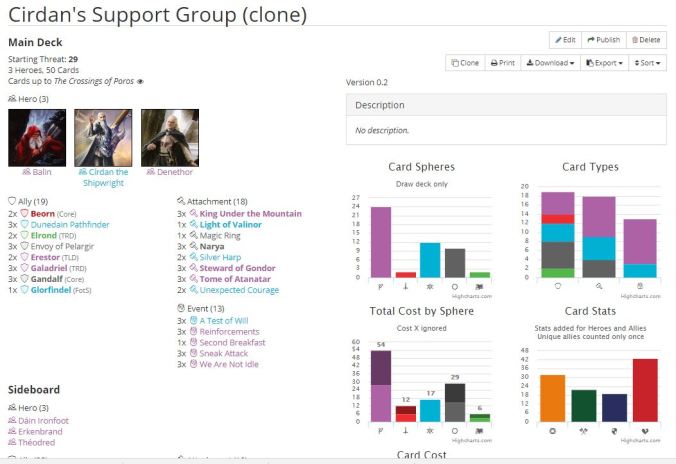 This version has added 3x Dunedain Pathfinders, 3x Envoy of Pelargir (these can redistribute resources to make sure each hero has a resource for Reinforcements), 2x Unexpected Courage, 2x Erestor, 3x Galadriel and has removed 2 Light of Valinor and all the dwarf allies. The demand on Spirit resources has been reduced by 4 which isn’t huge, but might help a little.

I had a fairly easy run this time. I missed Dain’s solid defense and the more multipurpose dwarf allies, but this worked. I felt like I had to play the Pathfinders to get any willpower going, but that didn’t really help because I ended up with too many locations around that I couldn’t afford to travel to.

The previous dwarf version could quest for 15-20 fairly handily and this version comes in a little lower at around 13-15 by the end game (a couple allies died). I finally got the pieces all in place to recur Reinforcements every turn this time. In a solo game, this really isn’t necessary in most quests but it is possible with either Magic Ring in play, or some resources built up on the heroes from earlier in the game.

Turn 14 win with everything in place (except Magic Ring)

This was a risky game since stage 3 discards my Silver Harp and stage 4 has the potential to discard your entire hand, but I made it work. I intentionally ran through my entire deck before facing the Nameless Things so I wouldn’t have to power them up with cards from my deck. Most of my allies got killed by the Dark and Dreadful treachery so I only had two allies on the board by the end. I had the Reinforcements cycle going at the end although I didn’t need it every turn since I wasn’t guaranteed an enemy.

This was a fairly long game at 15 turns but it worked!

I think I prefer the dwarf version over this version. The utility allies seem a little more useful and less fragile.

There are several versions of this deck to compare at this point. We have the original hero lineup of Cirdan/Balin/Theodred, the Dwarfy version with Cirdan/Balin/Dain version and the Cirdan/Denethor/Balin version which starts with extra resources.

As I see it the deck essentials include:

The original version’s strength is its multiplayer support including Theodred’s resource and the strong potential willpower that Ally Faramir can hand out to other questing players. This version seems the most intricate and has more ways to have things go wrong. Or maybe it just has more options.

The dwarf version is my personal favorite. It feels the most “conventional” while still wielding the massive power of the Reinforcements play. I felt most on top of the game while playing that version of the deck. I didn’t feel like I was relying on playing Reinforcements every turn to survive a combat phase. Using Dain is frowned on by some “elitist” players, but I don’t think he breaks the game here. Dwarves actually kind of stink without him…

The Denethor version started a little faster since it has those two extra resources, but I didn’t feel like Denethor brought much else to the deck. He can’t really quest or attack, and while he can defend, he’s really squishy without any support cards and if he dies, the whole deck is in deep trouble since you’ll never be able to play Reinforcements since you need resources from 3 heroes. This version also features the Dunedian Pathfinders which I felt had too much cost for what they provided. They will quest for 2, but they’re almost sure to pull at location that’s at least two threat and their combat stats are not impressive if they were to be readied with Narya.

Here’s the version I settled on as my favorite: 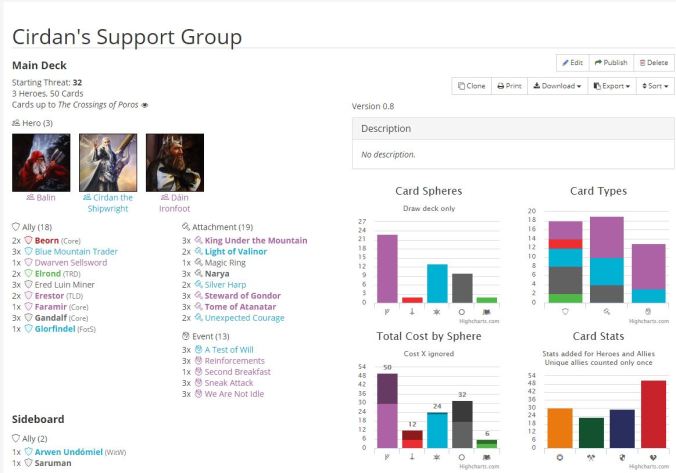 It features strong willpower without sacrificing any of the Reinforcements efficiency, has plenty of readying options for the heroes,  and has the accelerated card draw of Erestor. I tried Saruman in the deck and he didn’t do much since his effect only targets things in the staging area and since you usually want to use Reinforcements during the combat phase, he doesn’t do much. I played him in the final turn of a successful run  against the Wastes of Eriador so I could maul the Pack Leader for a nice 21 attack between Gandalf, Saruman and Angry Beorn. 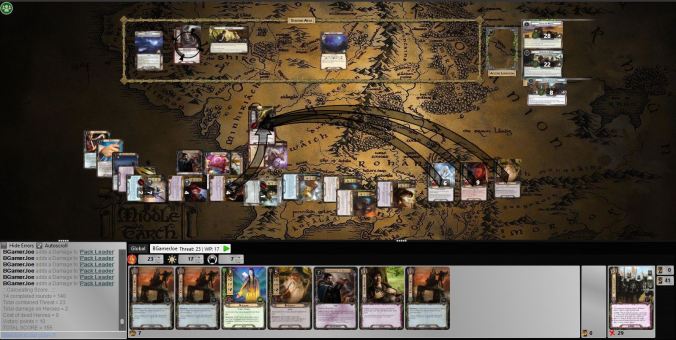 This deck destroyed The Wasters of Eriador, ending at 23 threat! And yes, I did have to deal with both sidequests!

This has been a long and meandering article, so congratulations if you reached the end… I know I’m tired or typing Reinforcements!

This is a very powerful deck. There are several variations possible that all function well. The form published a few weeks ago works great as a multiplayer deck and I think the Dain version is an extremely hardy solo deck that has some insane power once you get your combos online.

Thanks to the Purple Wizard for creating an awesome deck and letting me fiddle with it! Check it out on RingsDB if you haven’t already and look out for his solo version which he’s planning to publish once he settles on his favorite variation.