This Secrecy deck was created and submitted to this blog for testing by RingsDB user Marcelf. The deck starts at a low threat level and aims to get the Spirit Imrahil ally into play by a variety of methods, then drop its threat level by sending Folco to the discard pile while turning Imrahil into your third hero.

This looks like a consistent Secrecy deck on paper. Starting at 23 threat is solid and Galadriel has the potential to keep that threat steady and Folco has the ability to get the deck deep into Secrecy territory early in the game, or get back into secrecy after a few turns.

The attachments and events are solid with 3x of each and the ally list is diverse and powerful with some of the best Secrecy allies and good list of single copies of high cost unique allies.

Looking at the hero stats it looks like drawing Nenya right away is of paramount importance. Without Nenya, the willpower could be slow enough to make secrecy very difficult to maintain through the first few turns of a game.

Test 1 – Journey Along the Anduin

This was a fairly easy win with plenty of time available to prepare for the Hill Troll at stage 1. I topped out my willpower around 15 or so and I was often torn on how to use Galadriel. Using her for the draw and threat reduction is so helpful through a game, but you kind of need her for the willpower as well.

A nice first turn. Elrond’s Counsel gets me into Secrecy, Steward on Galadriel, Timely Aid gets Imrahil, and Henamarth is already scouting!

Between the Ithilien Lookout, Firyal and Henamarth Riversong, there is a lot of opportunity to scout out the encounter deck and prepare for whatever might be coming. 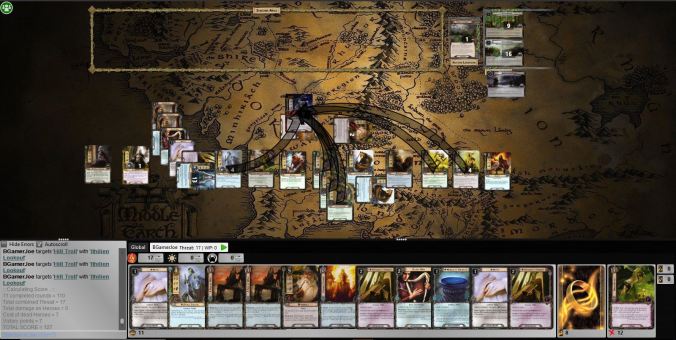 A hill troll as the final enemy giving Journey Along the Anduin nice bookends. Still in secrecy on turn 12.

This quest has several effects that keep raising your threat, so this will be difficult test for the deck.

But the deck overcame that threat! I got up to 28 threat in the early game, but once Folco started to “need some rest,” Denethor just let him sink into the bog to reduce the deck’s threat by 7 and along with some counsel from Elrond, I was back in Secrecy for the rest of the game. It’s actually kind of nice having a hero you know you’ll be discarding to give those terrible Condition attachments… Between using Galadriel nearly every turn, the 3 copies of Elrond’s Counsel and up to 3 plays of Gandalf, I was able to overcome the approximate 2.5 threat I gained very turn. The game went long enough that I was pretty much able to get the entire deck on the board and crush the Lurker right away when I hit the final stage.

This is the “quest of the week” for the LOTR Players Facebook group, so I thought I would give it a try.

I failed on the first two attempts, but won on a lucky third play. I once got down to 4 threat! The direct damage was very difficult to manage with only one healer in the deck so Low on Provisions cleared my board several times. But I guess that’s OK since the allies all leave play near the end anyway…

The scrying of the Lookouts, Celduin Travelers, Henamarth and Firyal were extremely helpful here to keep the quest under control. 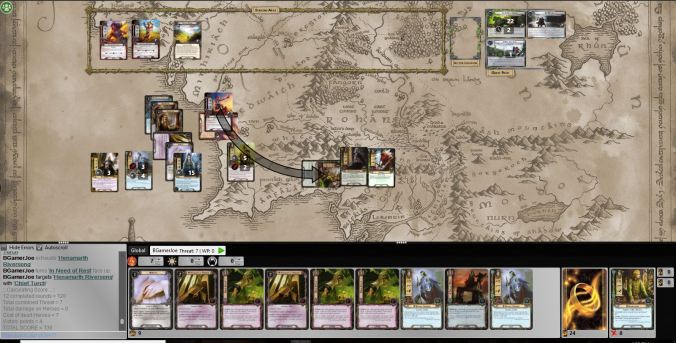 I did have to feed allies to Chief Turch through the last few turns of the game but keeping the deck’s threat low enough to not have to engage any enemy I didn’t want to was extremely helpful. This quest is brutal…

This quest was a stretch for this deck since it spams lots of small enemies that  have a low enough engagement cost that it may be difficult to avoid them.

The first few turns were a trick and I had to discard Folco on one of the first turns to avoid engaging an enemy I wasn’t ready for.

I had a hard time finding Nenya and since I had to discard Folco early, I wasn’t able to play Lore cards for a good 4 turns in a row. In spite of that misfortune, I got plenty of allies on board, got my threat down to single digits and almost emptied my deck by turn 9.

This is a very efficient Secrecy deck! Folco has done exactly what I hoped he would for Secrecy: he gives a deck a reliable option for getting back into secrecy after the first couple turns that usually push any 3 hero deck above 20 threat. Galadriel is another great hero for Secrecy. Her consistent ability to drop that threat level, draw cards and give access to Elrond’s Counsel really helps in the early game. Denethor is a solid choice for a third hero since he gives the deck access to the strong Leadership Secrecy cards and his resources give you the ability to play Steward on turn 1 and play a Timely Aid or Sneak Attack. His 3 defense stat is helpful in the first turn or two as well. Hero Sam would be another possible option for the Leadership hero but Denethor gives the deck a super fast start.

Turning Imrahil into a hero proved fairly easy and reliable. The hardest part was remembering to add a resource to Imrahil while playing on OCTGN!

A Secrecy deck really needs to stay below 20 threat for the majority of the game and this deck can do it. It managed to do exactly that through every quest I played including The Nin-In-Eilph which seriously jacks your threat through the roof. The combination of Gandalf, Galadriel, Folco and Elrond’s Counsel works very reliably.

The ally selection seemed well balanced between Secrecy allies which can be played for cheap and big allies that can be played with Timely Aid. I only had a Timely Aid miss once. My only suggestions for the ally list would be to increase the healing options a little. I would keep a second and maybe even a third copy of Warden of Healing in the sideboard for any quest with archery or direct damage. Most of the allies have 2+ hitpoints, but once that damage gets out, its really hard to get rid of with only one healer in the deck. Two Wardens and 1 Ioreth might be the best combo for this deck if the quest features direct damage. I was having a hard time with some of the treacheries like Low on Provisions and Dark and Dreadful. There are some decent defending allies, but even Treebeard will eventually die without enough healing.

I would say all the attachments are well chosen and most are essential. The Mirror/Harp combination is extremely strong. Having a choice from the top ten cards of your deck gives you so much flexibility it’s worth the 6 cards in the deck. With that combination in place, you could actually run fewer copies of other cards and reliably find them. The one attachment I was really missing in this deck is Unexpected Courage. Galadriel’s 4 willpower often went to waste since she was tied up keeping threat down. A single copy of Unexpected Courage would be worth it in my opinion. I would even give up a copy of Steward of Gondor to make room for an Unexpected Courage for Galadriel. In fact, this deck could probably stand on its own without Steward. It’s certainly better with Steward, but if you’re a “purist,” you could manage without it. You’ll just have to move a little slower. As it is this deck ramps up very quickly and is able to get nearly everything on the table by the 8th or 9th turn.

It looks like Marcelf’s previous version of this deck had one copy of Unexpected Courage in it but he removed it.

The events are all very helpful. Another event that would tie in well with the encounter deck scrying and secrecy themes is Out of the Wild. The effect of this event is reduced in solo play, but it can still be strong and effective for dodging some of the worst enemies or treacheries. You can check the top card of the deck with Henamarth, the Lookout and the Celduin Traveler and if it’s one of the worst cards you don’t want to deal with, you could play Out of the Wild and take that card right out of the game all for 1 cost. It would be hard to cut anything to make room for it… but this event certainly synergizes with other things this deck already does.

I haven’t played it in a multiplayer game, but I think it could work. It moves quickly and has some of everything to contribute to a game. The only drawback I see for multiplayer is the high count of unique allies. You might want to bring a couple extra allies like Gildor, Galdor or Haldir. Galdor would actually be really strong for this deck… when you fetch a card with mirror then discard a card, you could draw a card with Galdor and bring the discarded card back to hand with the Silver Harp.

It certainly works well as a solo deck!

I’m really happy with this deck! If you want to play a deck that stays in Secrecy mode and can actually do things, this is the deck for you. It’s consistent, fun to play, and sets up quickly. It’s not complicated and doesn’t have too many “tricks” but that makes it reliable.  This deck does have lots of encounter deck scyring tricks which make things interesting and can protect or at least give you a chance to prepare for some of the worst cards in a given quest. It might use a touch more healing and that Unexpected Courage on Galadriel would help mid game willpower numbers, but other than that, I wouldn’t change a thing.

Thanks to Marcelf for creating an excellent deck and sending it my way! The deck was published back in March so it’s not on the front page, but you can find it here. Go give it a like and play some games with it. This deck deserves more attention! 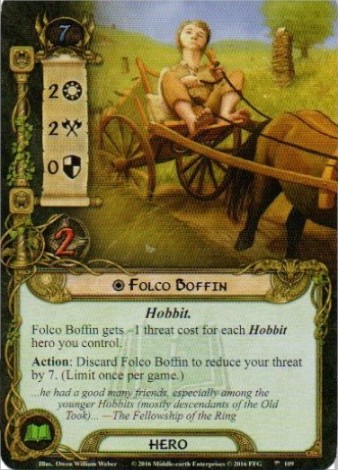 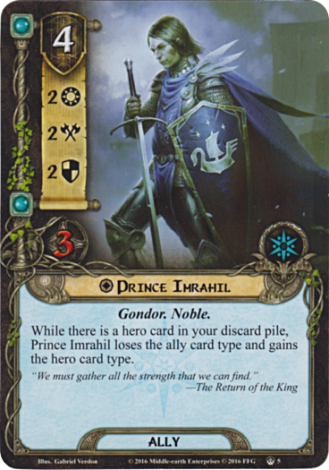 One thought on “Deck #54 Sneaky Folco”