So far this Rhovanion/Ered Mithrin cycle hasn’t been stingy with it’s power level! LOTR LCG players have enjoyed the release of some very strong cards lately and Grimbeorn is the latest powerful furry hotness.

The fascinating thing about Grimbeorn is that he functions in a similar capacity to his father Beorn, but you have to build around him in an entirely different way! Beorn can’t take any attachments and is immune to player card effects so he often is just “there” in a deck to gain an early foothold in a quest and then he either stops defending and only attacks, or you let him kick the bucket and bring him back with one of the hero resurrecting cards. Grimbeorn can also defend and attack like his father, but he’s there for the long haul and he will likely increase in power and effectiveness through a game rather than fade in the late game. The cost is that his support cards will likely take up a good portion of your deck and eat up a lot of resources with his counterattack ability.

As I’m writing this Grimbeorn has only been out for a few days but he was spoiled well ahead of time and he reached some players at GENCON so the community’s deckbuilders have already been at work! I aim to play through at least 4 of the Grimbeorn decks currently on RingsDB and learn a bit and give you some feedback on how I find the decks.

I’ll try to publish a series of posts on Grimbeorn decks over the next week and run each deck through a quick testing regime of Passage Through Mirkwood, Into the Pit and Escape from Umbar. I know these are highly played quests, but they are short quests that will give me a good idea of how the deck functions.

Chad’s deck features Middle Earth’s most Noble couple along with Grimbeorn. The decklist includes 8 Beorning allies including the new Beorning Skin Changer, the new Beorn’s Rage event, a splash of Mount cards and some solid Spirit questing allies. Tactics Aragorn strengthen’s Grimbeorn’s counterattack by reducing the enemy’s defense by an additional point which mean he will slice through  up to 3 defense points and go straight for the throat (hitpoints).

Absolutely crushed it. Spirit and Tactics is my favorite sphere combo and it worked beautifully here! Arwen provided card draw and resource smoothing. Grimbeorn and Aragorn worked together to keep the staging area clear and no enemy stood a chance. I put Unexpected Courage on Aragorn since I figured he could defend in a pinch but this would free him up to quest with Arwen and keep up the willpower momentum in the early game.

I drew Beorn’s Path as my final quest card and completed the quest on turn 7. My threat level was a little high at 38 but I had a Elrond’s Counsel in my hand just waiting for me to have a reason to play it. My card draw was just fine since I started with an Elven Light in my opening hand. The Skin Changer hit the board and could have transformed into Beorn but I was just waiting for a big enemy to come up to trigger him.

This played out excellent as well! These low health goblins are perfect Beorning snacks! Again, I never triggered the Skin Changer because I waiting for a turn where it would actually do something! Between T Aragorn and a Grimbeorn, more combat-oriented allies miight be more than you need In solo games.

I finished the quest on turn 10 at 38 threat with 29 cards left in the deck. With no healing in the deck the Honour Guards were essential and one of the most important allies in the deck. 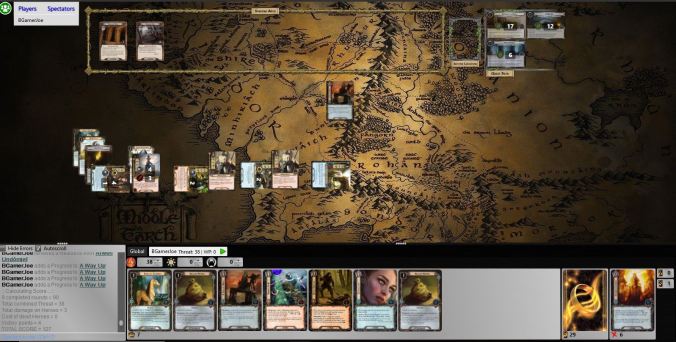 This was a hard fought battle! Those archers hit me over and over again in the early game and it was all I could do to survive the archery damage through the middle of the game. I was forced to target my questing allies with ally-hate treachery cards just so I could keep my Honour Guards around to stop the archery so it turned into a long game, but I cleared the board by cycling Beorn with the Skin Changer a couple times and then gained control of the board.

I even used one of the Guardians once to clear out a location that would have revealed another card if I had traveled to it.

I got ambitious and built up the deck with my real cards to play some games!

This is a strong deck! It’s fairly well-rounded for solo games but could also shoulder a large share of the combat in a multiplayer game. As a solo deck it almost has too much combat potential! Aragorn is a killer, Grimbeorn is a killer and the Beorning allies can carry a combat phase as well so you occasionally might find yourself with more combat power than you need when playing alone. But that’s a better problem than coming up short!

Tactics Aragorn is an interesting combo with Grimbeorn since he brings the defense of enemies down by an additional point. It can be more than enough in quests with easy enemies like 1 defense goblins, but it can be amazing in quests with enemies with really high defense values. One of the strange things about building around Grimbeorn is you kind of don’t need a separate attacker and defender since Grimbeorn serves as both. But if you ever fall behind with Grimbeorn not having enough readies or resources, you could get into trouble fast. Aragorn is excellent since he supports Grimbeorn with his passive ability, but he can quest decently, then switch to combat support when needed. He makes the deck start at a high threat level, but it really works well here. Arwen is always good and she’s even better with Aragorn on the board. Just her Elven-light cycling for that extra card every turn makes her invaluable. Her access to Elrond’s Counsel is really helpful as well.

The potential weak points I see in the deck are lack of access to healing and threat control in a longer game. Grimbeorn is going to be defending a lot and even with good stats, he’ll end up taking damage eventually. The Honour Guard can help out immensely if he comes up early enough but if you get a bad shadow card early and drop 3 damage on Grimbeorn, it can be dangerous using him to defend anything more than a 3 attack enemy after that. The deck does a good job of not going overboard on filling the deck with toys for Grimbeorn, but I found he was left a little vulnerable at times. Beorn’s Rage can help nerf the larger enemies as they come up, but the lack of the ability to respond to a bad shadow card would be the dangerous moment for this deck. Another way to make up for lack of healing would be shadow protection. Hasty Stroke slows the deck a little since you have to keep that resource available to play it, but Sternerthan Steel isn’t going to be reliable without more weapons/armor in the deck. In quests with nasty shadow cards, I would tend to add that Hasty Stroke just to make sure you can protect such a valuable hero.

Threat control is the other difficulty I ran into while playing. I never threated out, but I came close. Starting at 32 is bold and those 3x Elrond’s Counsels are the only options for keeping that threat level in check. I know single copies aren’t reliable but I would feel safer with at least one copy of the Galadhrim’s Greeting in the decklist (at least for quests that tend to go longer than the standard 7-9 turns).

While this is a solid solo deck, I think it could be even greater in a multiplayer game. There are plenty of options for readying on Grimbeorn here and the ability to defend for other players and attack back and either take out their enemies entirely or soften them up so they can devote more energy to questing is really strong. If another player can support Grimbeorn with some healing abilities, this deck should be able to take on a huge part of the combat phase in a multiplayer game.

If you were to use this deck a lot in a solo context, I think it would be possible to cut back a little on the Beorning allies and add a few more support cards for Grimbeorn like additional copies of Raiment of War (which can be played on Beorn as well!), some shadow cancellation cards and maybe another threat reduction card or two. This deck might struggle with quests that demand a lot of willpower right away as well. It has a solid base of 5 starting willpower and can reach 20 which is enough for nearly any game, but with only one Spirit hero it doesn’t spam out that willpower too fast.

Thanks to TheChad for publishing a solid and enjoyable deck featuring our newest hero! Check it out on RingsDB right here and give it a like. I’ll be posting some more short articles on a few more Grimbeorn decks shortly. I was going to post one massive post looking at several decks at once, but I got bogged down and I wanted to get this post out! Tomorrow I’ll try to get out an article on To Beorn or Not to Be by Alduc.