This deck was sent to me by Wandalf the Gizzard a while back and I’m just getting to trying it out. I apologize for the delay. 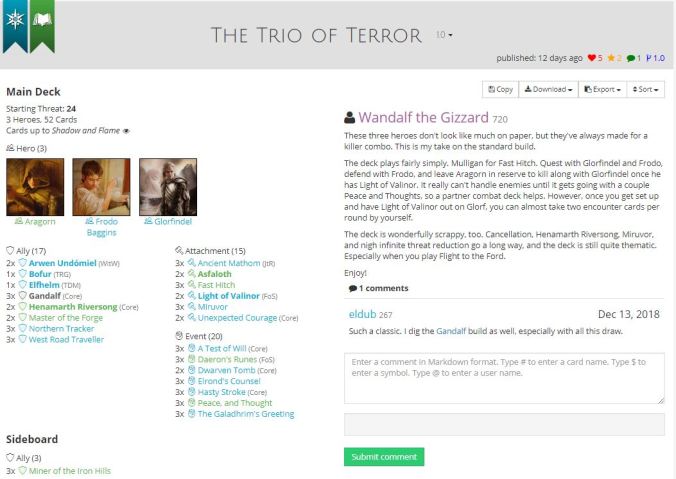 This is an “old school” deck full of great cards from the first two cycles of the game. So many good cards from Shadow and Flame, Watcher in the Water and Foundations of Stone. Back in the “good old days” when you could get those packs…

This set of heroes looks great together with Frodo and Glorfindel providing great early game momentum while Lore Aragorn can compensate for their quick threat gain in the midgame.

From the card counts, it looks like this deck is built from 2 core sets plus the first two cycles.

This was a fun game but I destroyed it. My first turn was perfect, perfectly questing to get a cheap Bofur, killing the spider and taking no damage.

I got Henemarth out on the next turn and neatly got through the quest in 7 turns, killing Chieftain Ufthak along the way and only reaching 32 threat having never used Aragorn’s refresh action. 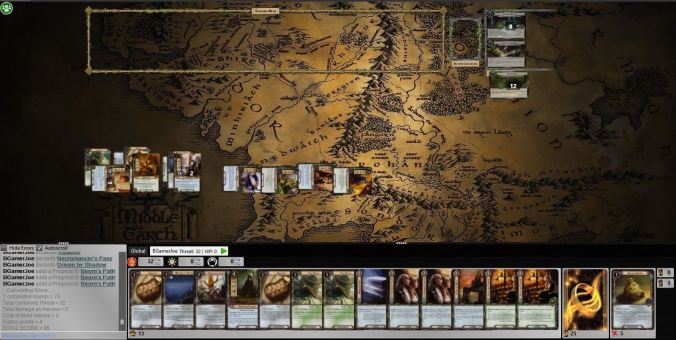 I tried a quick Nightmare PTM but it didn’t go well and I moved on.

Asfaloth is really solid tech for this quest. There’s so many locations with 2-3 progress points. Keeping your threat low also makes some treacheries entirely ineffective.

I got control of the board fairly early and worked my way through, finding a clue around turn 5 and winning on turn 11. It took a while to work up enough attack to kill the Hunters from Mordor, but their engagement cost was high enough I didn’t have to take them until I was ready. This was a fun game and I think I’ll try it on Nightmare mode.

This was a challenge but I had the right cards (namely, Asfaloth) to counter the location lock that often happens.

I was happy to have Hasty Stroke when this shadow would have discarded my entire hand!

I ended up with 3 clues by the end and drew through my entire deck well before I won on turn 17. By the end I was using Miruvor for the +1 willpower and recycling it to the top of my deck.

Frodo’s ability is a lot of fun to work with. I feel so safe having him around.

I’m trying to get to several of the quests in the first cycle since this deck is working with a very limited cardpool.

I won! Lore Aragorn is the best hero choice you can make for this quest. I was lucky to not draw one of those terrible 8 attack Attercops. I was all excited about Spirit Elfhelm for a little bit but it turns out he doesn’t work here. His effect triggers off encounter cards, quest cards and not questing successfully and the extra threat in this quest comes from the Gollum objective. Sad trombone…

If I was to build a deck to play against this quest, I probably wouldn’t pick Frodo since he raises your threat along with Glorfindel (until I get Light of Valinor), but it worked! I won on turn 10 with a threat level of 46 even after resetting during the mid-game with Aragorn. 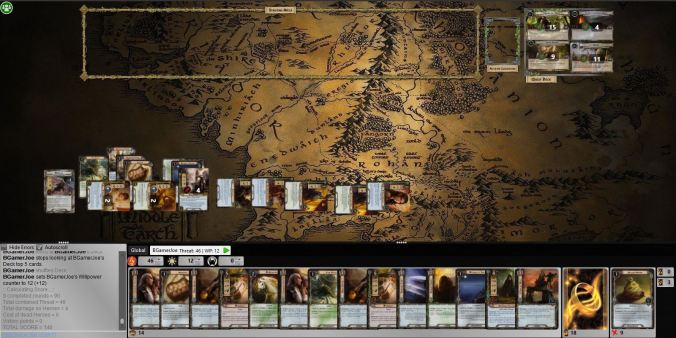 From the oldest to the newest! I instantly liked this quest when it came out and its good to see a deck full of old cards be competitive against a brand new quest. It was a challenge but I won. Killing the  big trolls that pop up can be a pain, but the other challenge this encounter deck throws at you is threat raising effects and this deck is good at dealing with that.

Urdug’s attack can be erratic at the end of the quest but Frodo can take it!

The first stage was pretty hard since I didn’t draw any early willpower, but the Cave Torch got me through! Between the Cave Torch, Asfaloth and the Northern Trackers, locations didn’t stand a chance. Shadow cancellation is really good in this quest so I was thankful for Hasty Stroke.

I didn’t get my Peace and Thought as early this time so I still had 11 cards left in my deck by the time I won on turn 14. Most of the time I’ve been completely drawing my deck by that point. I reset my threat near the end of the quest just for fun. Ended the quest at 26 threat and a good lineup of allies on the board.

Beat it. It took some time at 13 full turns, but it was fun and I had to make some risky choices a couple times, but I won! 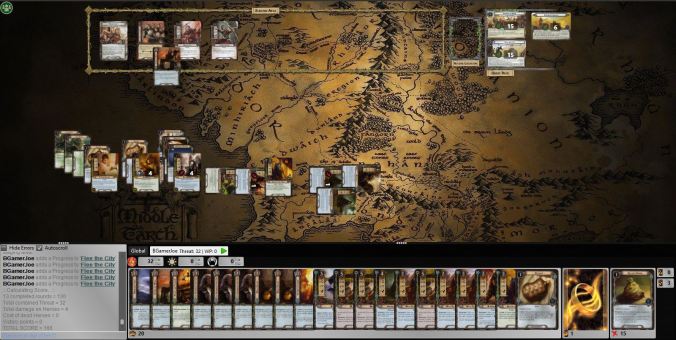 Its not often that a deck with no healing can beat Escape from Umbar!

This is a strong deck! This hero combination is deadly and is reputed to be a favorite lineup of Glaurung, one of the intense internet personalities of the early life of the game. Frodo is immensely powerful is used well and he covers that early game weakness so well. If you need to take an undefended attack, he covers for you. That cheap readying through Fast Hitch makes him even better. Both Frodo and Glorfindel use threat as a resource and Lore Aragorn can erase all cost associated with that resource sometime in the middle of the game. It’s a deadly trio!

Most of the rest of the cards in the deck are still cards that I regularly use today which really speaks to the strength of those early releases. Miruvor and Spirit Eflhelm are the only cards from this set that I rarely use (and that’s not because they’re bad).

The ally selection is packed with all-stars. Arwen, the West Road Travelers, and Bofur boost your willpower and Elfhelm and the Northern Trackers assist with combat or questing as needed. Henamarth is always worth that 1 resource. Even without resource generation, Gandalf is good for flexibility. I used his card draw and his threat reduction in my games. I like the quantities of duplicates here. Arwen might be worth a 3rd copy, just to get Frodo up to 3 defense, but it’s so easy to take that damage as threat so it’s probably good as is. I tended to build up a little pile of Lore resources in the late game so I might suggest adding a single copy of a nice meaty Lore ally like Haldir, Gildor, or Firyal (if you want to expand the card pool).

Having the Minor of the Iron Hills in the sideboard is good for pulling in on quests with Condition attachments. I might pull out a Miruvor and a Galadhrim’s Greeting to make room for a couple copies of this magical dwarf.

The attachments list is full of strong cards as well! I might suggest a 3rd copy of Light of Valinor just because its that good, but it’s hard to decide what to cut. Considering LoV is basically a Unexpected Courage and a -1 threat per turn, I’d be willing to cut a copy of Miruvor to make room for it. Miruvor was solid in this deck, but since you have the option to recycle it, I think 2 might be OK. I like Asfaloth at 2x since it’s a little hard to get out in the early game just because of the resource curve. You don’t rely on it, but it sure is good when it gets out.

It feels strange using Lore Aragorn without Burning Brand, but Frodo is such a good defender, it doesn’t make sense to include it here. The copies of Hasty Stroke a really good for keep Frodo safe though.

The events were all useful in my games. If I was to thin it out a little, I think it could afford to drop a copy of Dwarven Tomb and The Galadhrim’s Greeting. The Greeting was really helpful a few times, but it usually later in the game when I’ve had one sitting in my hand for a good while. For longer games, a single copy of Will of the West could be useful. I ran out of cards a full 4 turns before the end of a couple games! Not necessary but it might be useful in some quests.

Between Ancient Mathom, Master of the Forge and Peace and Thought, card draw is really robust and I was rarely “top decking.”

If you were to expand the deck beyond the limited card pool it was built within, there would be some more interesting options, but it works as is and these wouldn’t necessarily be better in all cases, but they could provide some fun variety or good tech vs certain quest effects.

There are more options for 2 willpower Spirit allies now so you could swap the Traveler for Galadriel’s Handmaiden for some more threat reduction or the Sailor of Lune for some durability, ally Sam could be fun (and cheap), the Silvan Refugee would fit in for some cheap early game questing, but those are just fun options that aren’t necessary. A copy of Rhovanion Outrider couple replace a Northern tracker for some slightly cheaper location control.

A Watchful Peace would be a good Spirit event to sub in if you wanted some variety. With some powerful location control and good scrying, you could cycle a single location a couple times and make some really good progress without worrying about enemies at all. Fair and Perilous could be a nice attack boost for quests with bigger enemies.

This is a solid deck and its a lot of fun to play! It has a little of everything and when you combine that with solid card draw, you have a powerful deck. There are probably some fun alternate cards from the newer card pool you could sub in, but it honestly doesn’t need it. It works and its fun! I beat 7/8 quests I tried with it and that’s a pretty good track record. Having your heroes die and threating out are two of the easiest ways to lose a game and between immortal Frodo and super sneaky Aragorn, they mitigate both those dangers to a huge degree.

I would count this deck as primarily a solo deck since it usually plays a long/control game, but it might work as a multiplayer deck as well.

Before wrapping up here I encourage anyone to look up some of the other decks built around these 3 heroes. They truly are a Trio of Terror! Seastan has a deck that he beat Carn Dum with, Mr Underhill has a deck using these heroes and a lot of newer player cards he used to beat Cirith Gurat, Beorn has a thematic Flight to the Ford deck,  in addition to another 10-12 decks by other good deck builders on RingsDB.

I feel bad because I didn’t offer much as far as advice or changes for the deck, but the deck is working! Keep on crushing it!

Before I end here I have to get on my current soapbox and encourage FFG to reprint the first couple cycles. There are a ton of good cards in this deck but most of them aren’t avaliable to newer players because FFG hasn’t reprinted them! For over a year! You can  encourage them on Twitter if you feel as grumpy about this as I do…

Go over to RingsDB, check out the deck and give it a like. Thanks to Wandalf the Gizzard for making a great deck and sending it my way. 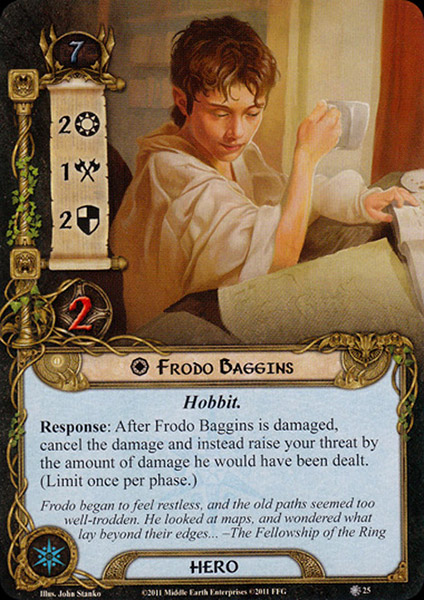