This Treebeard/Galadriel deck was built and shared on RingsDB by user SamthemanGamgee. I always enjoy playing with the hero version of Treebeard so this deck caught my attention.

This deck has some old cards, some proven combos and some brand new cards from our current cycle. I really like the look of this hero lineup. Three super powerful heroes for only 27 starting threat is pretty great! The resource curve looks really good, and the quantities of duplicates on the important cards looks well balanced. It’s fun to see a couple of the new Guarded attachments in here as well!

A solid win. Card draw, threat control were nicely taken care of. Only regret was finally earning Glamdring on the final turn of the game so I couldn’t use it. 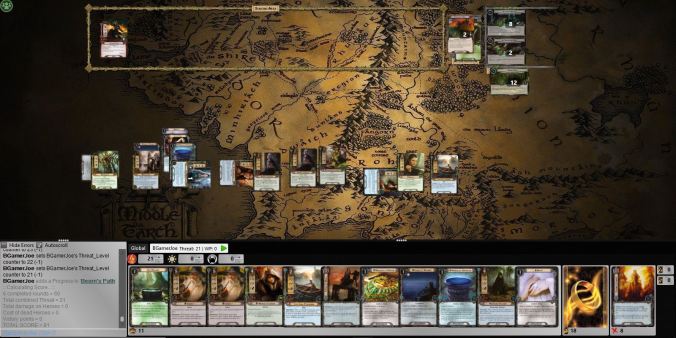 This was a hard one only because I got the Southron Captain as the Southron Champion on turn 2 or 3. I had to sit there and build up my board state so I could take him down in one attack. At 7 attack, it was pretty challenging to actually defend against him but at 4 threat, he would remove 4 progress every time he killed a character!

I stayed at stage 1 for a good 11 turns or so then raced through the second stage in no time. I got maxed out on archery damage for a bit there until I got all three Wardens healing up. Card draw is excellent in this deck. The only thing holding it back from powering up faster is resources. Even though I never played it in this game, a second or third copy of the Necklace of Girion might be good just for the resources.

I ended the game with 22 threat, 16 cards in my hand and 2 left in my deck. Getting that Mirror, Harp, Unexpected Courage, and healers out all takes time with no resource acceleration but once you have it out, it’s pretty bonkers.

That was a good time.

This recent quest has become a new favorite of mine. The treacheries can be difficult for a deck like this, but this is a control deck and does well against a quest like this that gives you a chance to turtle and control how you progress.

This was a fun game! I might have dragged it out a little longer than necessary but I got a solid win with nearly every ally on the board, both Guarded treasures earned and threat stabilized at 26. The large trolls are a challenge for a deck like this, but with threat control and Henamarth Riversong telling me what was coming nearly every turn (except when a Hunting Eagle blocked his scouting efforts), I was able to lock down this quest pretty well.

I won on turn 16 with a dominant board state. My hand was empty from a late game Lost in the Wild. I boosted Treebeard up to his full 7 attack to take out Urdug in one smack.

Test 4 – Flight of the Stormcaller

I haven’t played this one in a long time. Took me a bit to get the sailing rhythm down again. This quest doesn’t give a player the luxury of turtling which is what this deck loves doing. I had a hard time building up enough combat prowess to engage the Stormcaller on the couple turns I caught up to it in the mid game so I focused on questing through on stage 4 which worked out. Henamarth can give you some good sailing moments. On the last turn I finally got him out and looked at the top card. It was a fairly harmless treachery so I sailed for 0, went off course by one but quested with enough to win the game. Control is good!

I did take down the Swift Raider mid way through the game but after that, Treebeard had some serious damage and with no healer in play, I wasn’t super eager to engage those Escorts in the Stormcaller’s staging area.

The Narelenya really helped with the resource tempo and I was able to get 8 allies over the course of the 9 turn game.

This is a smooth running deck! A good Galadriel deck makes me happy and this did the trick. High threat and readying are two of Treebeard’s weaknesses in Lore and the Galadriel/Glorfindel hero combination really covers those weaknesses with easy access to that Unexpected Courage, low starting threat and threat stabilization.

After experiencing those quests, I would say if anything, this deck could use a little more emphasis on healing for Treebeard and any more resource generation that might be possible within these spheres. Without consistent healing, Treebeard becomes less fun since you get to use him once or twice, then he limps along as a 2wp quester until you get that healing online.

I think Ioreth is Treebeard’s best friend since her healing is so focused. Treebeard was doing most of my defending in this deck so he was taking a little damage and if I wanted to use his questing/attack boost, that added a bit more and removing 1 at a time with Warden of Healing didn’t bring him back very fast. I pretty confident at least 1 Ioreth would be worth it here in spite of the recurring resource drain. You can heal 6 damage off Treebeard by the time you spend the two resource it would have costed to play the Warden of Healing. My suggestion would be to cut 1 Warden and a Gandalf to make room for 2 copies of Ioreth.

There aren’t many options for resource acceleration, but you could double down on the Necklace by removing Glamdring (which would be less necessary if you have more healing for Treebeard so he can attack harder) and possibly add a Magic Ring, although it’s really not that good for resource acceleration since it takes you a full 3 turns to start seeing benefit and you lose the benefit of the other card you could have played in that time… But Magic Ring is good on Treebeard in any case! I’d gladly cut a Daeron’s Runes to make room for that Ring.

The other cards are all excellent and I really like the ratios. The Harp/Mirror combo is so good the 3x of each doesn’t bother me at all. The unique allies are nice but not necessary enough to warrant more than 1 each and with the Mirror/Harp combo, you can cherry pick that 1x fairly easily. Arwen is obviously really strong so there’s 2 copies, but that could honestly be reduced to 1 as well if you’re looking to make a little more room in the deck. I was considering recommending bringing Ent Draught down to 2, but getting that on Glorfindel brings him up to 7hp with means you can easily take an undefended attack or two throughout the game without much worry.

Gandalf is always good but at 5 resources and plenty of other cards always in your hand, he could probably be reduced to 2 as well and you’d still have him in hand when you need to play him.

The other card I might keep in a sideboard would be Hasty Stroke. If there are particularly nasty shadow cards that could take out a hero, you might want that available or Treebeard could go down.

With the way I like to play, I’d be tempted to throw a Will of the West in there just so I don’t get bored when I run the deck dry! If you’ve run the deck out, you’re probably already winning big so it’s not really worth the deck space, but the card draw is strong enough here and that targeted Mirror of Galadriel means you could shuffle that deck up and quickly get those Test of Wills back into your hand to play again.

Tips and Tricks for Playing the Deck

Opening Hand: look for Nenya, Unexpected Courage, Light of Valinor, and a questing ally. Any of those will basically be awesome.

With 18 and 19 cards costing 1 or 2 respectively, the Long Lake Fisherman is a nice way to grab another piece of a combo. If you need that LoV, or Nenya, guess 1 and even if you don’t see what you were wanting, you’re sure to get something else solid like a Test of Will, Henamarth or the Necklace and the same thing applies to the 2 cost cards. He’s like an inferior Heed the Dream with a body.

Don’t forget that your allies will quest without exhausting on the turn they enter play. Galadriel is so good with her card/threat ability and Nenya ability that the ally ability is easy to forget but it can really help out in combat in this deck. Those Northern trackers can quest, apply their progress and help out in combat on that turn they enter play. Gandalf is also really, really good with Galadriel on the table. This ability is actually a bit of a penalty for ally Arwen though. She can quest but she can’t apply her defensive bonus unless she exhausts. She can actually defend a 2 or 3 attack enemy on that first turn and apply her bonus to herself if she absolutely has to!

Arwen’s ability might not always be best on Treebeard. If you’re likely to be facing two enemies or more during the combat phase and you don’t have lots of readying on Treebeard, it could be good to actually give Glorfindel the +1 so he can defend in a pinch. With those 5 (or 7 with a Draught) hitpoints he can take a hit and survive and leave Treebeard free to pound something into the ground. With the Warden of Healing the only healing in the deck, you might as well get some damage on someone else so the healing is efficient. I did this a few times in Escape from Umbar and as counter-intuitive as it seems, it was actually helpful a couple times.

Henamarth Rivesong is really good for planning out how to get those guarded cards. My favorite is when Henamarth sees that surging chump enemy on top. Then you can play your Guarded card with no real penalty. You’re going to see that second card anyway so you might as well attach that card to the little enemy. This worked well for me in Roam Across Rhovanion. Who knew the Hunting Eagle could fly around with Glamdring!

Between Galadriel/Nenya and Treebeard’s flexible willpower, you can be extremely precise on your quest phase.

I would count this deck best as a solo deck, but it would function just fine as a multiplayer deck as well as long people don’t mind you keeping Galadriel all to yourself.

This is my kind of deck. A powerful turtle deck with plenty of stats, flexible options and lots of card draw. There’s always something to do and you’ll rarely get caught without backup options. I beat every quest I played with this deck and had a good time on each game.

With fairly low threat and the ability to stay in that same 20-30 range indefinitely, this deck will be good for a wide range of quests and I highly recommend it! Thanks to SamthemanGamgee for creating and sharing a great deck! Check out Mobile Home for Elves on RingsDB and give it a like!